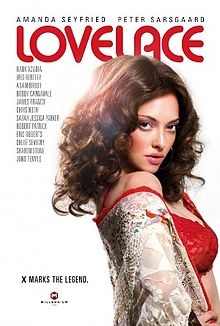 Linda’s juxtaposing stories have caused much deliberation on the actual truth behind Lovelace and this film explores both concepts so convincingly that the viewer is none the wiser. At first, Linda is introduced as a sexual liberator: the poster girl for the sexual revolution, carefree and with the aspirations of a real actress. In love with the limelight and under the protection of her husband, the scenario is controversial but palatable.

This is soon replaced by Linda Lovelace as a victim of domestic abuse: she is beaten, raped, degraded, but utterly dependent on Chuck since her mother’s assertion that a woman’s role is to obey her husband. Lovelace’s star-studded cast includes a whole host of well-known actors such as Juno Temple, James Franco (as the infamous Hugh Hefner), Adam Brody, Wes Bentley and Chloe Sevigny. With an indie feel to the overall film, Lovelace is intelligent without being pretentious, heartbreaking without being delicate and humorous without being facetious.

Watch a clip from Lovelace here: