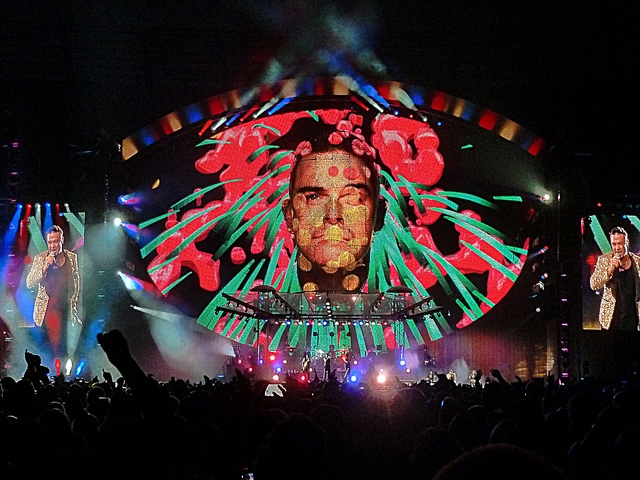 In his first stadium tour since 2006, and with a his most unabashed release since Escapology just out, it really feels like Robbie’s settling into his career’s overblown third act. He may no longer be the chart-topper he once was – but we’re no longer in an age of chart-toppers. Top of the Pops is gone, and the top 40 is not where today’s stars are made. More than ever before it’s on stage where mettle is proven, and Robbie Williams remains an almost unmatchable pop idol in the arena. Furthermore, his biggest hits are now of a perfect vintage, retro and from a bygone era, yet still contemporary enough to be hallmarks of his gradually aging audience’s youth. The key to a good stadium concert is in being advantageous in the main elements: the size and enthusiasm of the audience, and the mountainous budget at an artist’s disposal. Not all stadium concerts are Pink Floyd, with the music sometimes being of questionable quality or little artistic (yet high entertainment) value. Robbie’s Take the Crown show is well aware of this; indeed the singer himself has built a career on being something of an everyman performer. Not devastatingly handsome, nor a skilled dancer or indeed very “musical” musician, Robbie and his show are all about just that – the show – and they’re all the better for it. At no point was there even the slimmest chance for his enraptured crowd to get bored, with mind-numbing pyrotechnics and projections, along with audience participation galore.

The infamous “cheeky” Robbie personality is glaringly intact, and he effortlessly brought it across both on stage and up close on the big screen, never missing an opportunity to either wink at his fans in the front row or banter with the folks in the gods. Robbie’s personality quite literally is the show. The stage comprised of a massive Robbie bust, and the stage littered with busts throughout (the key image in the Take the Crown tour’s branding), it’s difficult to escape his almost deified appearance. His entrance was equally vivid and vain, emerging atop the 30-feet Robbie head, and gliding down onto the stage with wires before launching straight into Let Me Entertain You, instantly stirring the 60,000-strong crowd into a frenzy.

The setlist was a killer blend of fan favourites and outright classics. It’s easy to forget just how many hits Robbie Williams had, or indeed how he essentially defined turn-of-the-century British culture, bridging the gap between 90s Britpop and the 00s indie and electronic explosion. Mid-set highlights included the undisputedly anthemic Come Undone (sung almost entirely by the audience) and support act, Olly Murs’ reappearance to fill in for Kylie Minogue on Kids. The encore’s triptych of note-perfect epic pop ballads – Feel, She’s the One and Angels – are worth the price of admission alone, and Robbie Williams milks them for all they’re worth. Angels unsurprisingly received the most overblown treatment of the night, with fireworks exploding into the sky above Wembley throughout the second half’s non-stop crescendo.

Artistically and musically placid? Yes. But Robbie’s all about the show and the spectacle, and this was truly spectacular entertainment.

Watch Come Undone live in Dublin on the Take the Crown stadium tour earlier in 2013: