The Boat Factory at the King’s Head 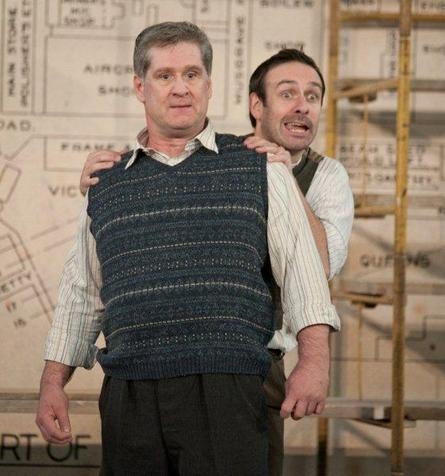 The Boat Factory at the King’s Head | Theatre review

Dan Gordon grew up in the vast shadow of East Belfast’s boat factory. Owned by partners Harland and Wolff from the 1830s onwards, this gigantic shipyard turned out some of the most luxurious ocean liners of the 20th century, including the iconic RMS Titanic. His passion for the factory where his father worked and his pride in the men of this community, shine through brilliantly in his heartfelt journey into the depths of Belfast’s shipbuilding history. Dan Gordon plays the recently apprenticed Davey Gordon (his father), while the charismatic Michael Condron is his closest friend (Geordie Kilpatrick). Gordon and Condron portray a multitude of other characters, from bawdy and buxom women to stern and violent officials. Often switching characters with the passing of a bowler hat and a slouch of the shoulders, the pair, weave the stories of local characters with those from Herman Melville’s Moby Dick, creating a patchwork quilt from the legends and myths that develop in a closely-knit working community.

Davey and Geordie’s relationship is the beating heart of this play. Working together on the factory floor, and observing the comings and goings from the top of the scaffolding rigs, the pair bond over fears, joys and mutual obsessions. A simple set of scaffolding and work benches is used to great effect, and  when Geordie climbs over 200 feet to the crow’s nest, you really believe he is up that high, with Davey, terrified of heights, quivering 20 feet beneath him.

Excellently directed by Happenstance’s artistic director Philip Crawford, the scenes are broken up with descriptions and lists of the tools used in carpentry and joinery, to a soundtrack of hammers and chisels composed by Chris Warner. This both adds to and diffuses tension at key moments throughout the play and means that it can be a touching and moving account of male friendship without ever slipping into sentimentality.

Ultimately though, it is the men’s pride in themselves and those that have come before them that makes this play a joy to watch. This shines through every line of dialogue, remaining until the end where it serves as a fitting tribute to a lost world.

The Boat Factory is on at the King’s Head Theatre until 17th August 2013, for further information or to book visit here.

Patty Griffin at Union Chapel | Live review
Luc Waring – Who Do You Think You Are? at Imitate Modern ǀ Exhibition review