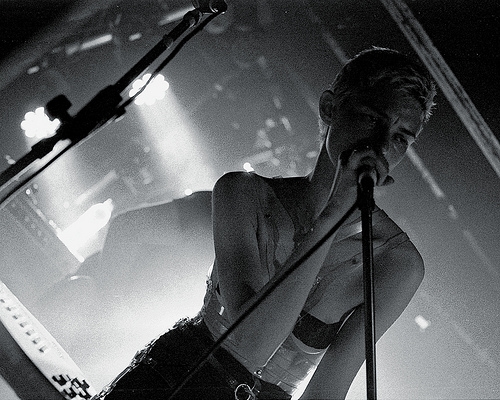 Vuvuvultures hit Rough Trade East to showcase their self-released debut album: the post-punk, indie electronica offering that is Push/Pull.  At first glance, lead singer, Harmony Boucher, throws a wealth of contradictions from the stage. The picture of androgyny, she opens her mouth to reveal unexpectedly honeyed, feminine and even pop vocals. Whilst exhibiting a determined, wintry and often downright eerie stage presence, between songs Boucher is effortlessly bubbly and easily charms a sizeable Tuesday night crowd. Oddly though, it all fits together somehow and most listeners are hard-pressed to ignore Boucher’s demanding charisma. Steel Bones is up first and is perhaps the quartet’s most accessible track, as it unabashedly shows off Boucher’s solid vocal control and balances indie pop with something darker and more off-beat. The band’s cohesiveness is obvious from the start as the barrage of warped, brash sounds – including an underlying keyboard loop resembling an off-key music box – comfortably melds together.

Following on with The Strangler and Ctrl, Alt, Mexicans, the four-piece keeps up with Steel Bones’s promise of more accessible tracks, however things get a whole lot grittier as they move into the decidedly sinister I’ll Cut You. Boucher’s vacant stare amps up her vocal eccentricity as she belts out octave after piercing octave, inevitably ending in an all-out, high-pitched scream. Damaged eardrums and crawling skin aside, once again her obvious vocal control is impressive, to say the least.

The vocal theatrics don’t stop there as she steps down into the audience for an aural onslaught of yelling, wailing, a little forced vibrato and general vocal manipulation for the latter part of album title track Push/Pull. Unfortunately this oversteps the mark, as Boucher’s well-trained voice from earlier in the set is replaced by something more flat and off-key. This could well be intentional and all part of Vuvuvultures’s grand plan to further their undeniably magnetic appeal, however it lets down what is otherwise a polished and promising set.

For further information about Vuvuvultures and future events visit here.

Watch the video for I’ll Cut You here: