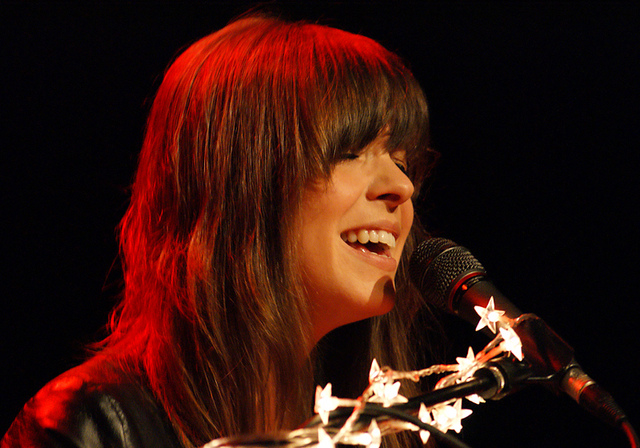 St Pancras Old Church played host to Laura Jansen’s sole UK date last night. With the need to diversify becoming ever more pressing, the church has turned itself into one of London’s most unique venues. Admittedly it is slightly disconcerting to see cans of lager being sipped by the pulpit, but there’s little doubt it makes for a wonderful space. The reverential setting had little effect on Jansen, who despite a few quips about her Catholic upbringing, delighted in the intimacy the holy confines afforded. A major star in the Netherlands where she grew up, Jansen may deal in the stock-and-trade soul baring that we’ve come to expect from piano playing songwriters, but her persona is anything but bruised and battered. She plays with a smile barely leaving her lips and maintains a constant patter with the audience, filling in the background to many of her songs: Single Girls was born out of a bad break-up, while Bells makes a lot more sense after she’s explained the terrible homesickness caused by church bells ringing out in Nashville.

Her voice is pure and powerful; its upper registers buzzing slightly as it tests the limits of the church’s sound system. Like her songwriting, though, it’s a little too clean cut to aspire to anything other than radio-friendly piano music. Her list of collaborators tells its own story – from Aqualung to Tom Chaplin of Keane – she’s an artist who focuses on winning melodies and sparkling piano, leaving the experimentation to more adventurous souls.

For most of the concert she was ably assisted by her regular touring band mates, JP on guitars and Woulter on drums, but they left the stage for Jansen to close out proceedings in solo fashion.

She began with Kings of Leon’s Use Somebody, a hackneyed choice of cover if ever there was one, but at least it afforded an audience sing-a-long. The night finished with her skipping down the aisle to take a seat at the church’s old piano at the back, to perform the confessional Pretty Me microphone-free. It was a special moment, indicative of Jansen’s utter confidence in her ability and her engagement with the crowd.

Her songs may slip into Grey’s Anatomy soundtrack mode a little too often, but she’s an exemplary live performer, and with shows as charming as this, she’s sure to see the ranks of her UK followers grow considerably.