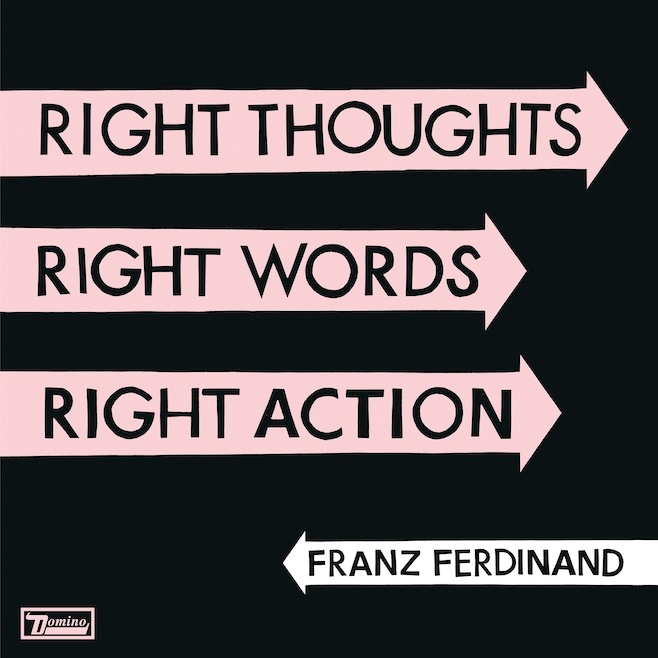 Back before Franz Ferdinand achieved worldwide stardom, lead singer Alex Kapranos was asked to sum up his band’s sound. “Music for girls to dance to,” came the reply. Back in 2004, when the rest of the British rock music scene was still trying to rehash the glory of the Britpop era by writing Oasis-aping strum-alongs, Kapranos’ commitment to the business of making unashamedly catchy pop music was a breath of fresh air. It was a quality that served the band well – their debut released to universal acclaim and was just as likely to be heard playing at a nightclub as an indie disco. Such stratospheric success rarely comes without a subsequent comedown however, and by 2009’s Tonight, the band’s spark had seemingly fizzled out. Right Thoughts, Right Words, Right Action is a winning return to the energy of the group’s first couple of records. It’s the sound of the band stripping away any unnecessary bells and whistles, and carolling their whip-smart lyrics and jagged guitars with the sole intent of getting hips shaking.

Lead track and first single Right Action sets the tone, settling into one of the band’s trademark grooves, which is equal parts Talking Heads and Chic. Aside from a slightly more muscular bass sound, there’s little evidence that this record isn’t in fact a long-lost recording session from 2004, but then that’s no bad thing. It’s a honed formula that produces breezy jams like Love Illumination or the rollicking two-and-a-half-minute burst of punk guitar that is Bullet, which goes down as one of the finest things the band has ever recorded.

Over the top of all the angular riffs, Alex Kapranos is back on top lyrical form, his laconic wit allowed to roam after sounding somewhat constrained by Tonight’s Ulysses concept. Of special note is Brief Encounters, a tale of suburban swinging that showcases the playful lasciviousness that made Michael such a delight.

Franz Ferdinand are never going to recapture the zeitgeist of the early 00s; the indie revival they spearheaded has been thoroughly subsumed by the mainstream, the idea of a punky guitar band registering a chart hit no longer raising any eyebrows. When they’re at the top of their game though, none of the bands that have followed in their wake come close to matching their panache. Most importantly, Right Thoughts, Right Words, Right Action is just tremendous fun.

Right Thoughts, Right Words, Right Action is released on 26th August, but you can pre-order the album here.