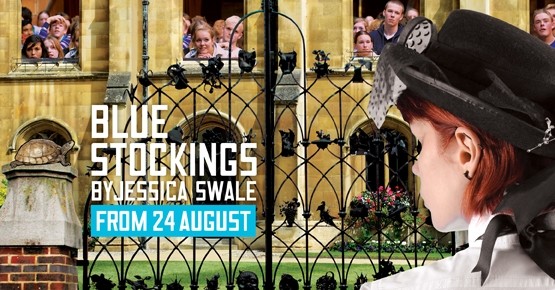 Powerful and entertaining, John Dove’s Blue Stockings by Jessica Swale thoughtfully depicts controversial gender inequalities in the 19th century education system and earnestly captures the voice of the young women who fought for the right to be recognised scholars, paving the way for the freedoms we experience today. With hysteria believed to be a disease of the wandering womb (specific to the weaker sex), and the refusal to recognise a degree if it was earned by a woman, the prospects for female academics of the era were extremely limited.  Following Girton College girls and faculty on their undertaking to attain the right for women to graduate, the candid script, moving performances and creative use of staging vividly recreate the personal and political struggle involved.

Ellie Piercy is congenial and convincing as Tess, expressively bringing to life a character who is truly conflicted about what it means to give up reputation and family prospects in exchange for knowledge.  Her studious drive is admirable but you empathise with the young woman when her resolve wavers in light of a budding romance.

Sarah MacRae as Miss Blake is passionate and outspoken in the way she challenges the girls to think differently and question what they learn.  Although her devotion to teaching is apparent, her loyalty to the movement for equal rights realistically personifies the women who gave up so much in the pursuit of this cause.

The staging is dynamic as the Girton principal addresses the crowd, her plea for a vote at the forefront of the runway creating more drama in an already pivotal scene.  With the undergraduate men of Cambridge quietly immersed in the essay of a female student on the lip of the stage and the girls seeing off a friend to the left and right, the three scenes showcased simultaneously exemplify a moment when fairness finally seems within reach.

Along with comedy and an upbeat dance number, the performance successfully engages the audience and allows you to comfortably take in such unsettling content with compassion and understanding.

Truly a rare and thought-provoking window into our past.

Blue Stockings is on at Shakespeare’s Globe Theatre until 11th October 2013, for further information or to book visit here.