Grounded at the Gate 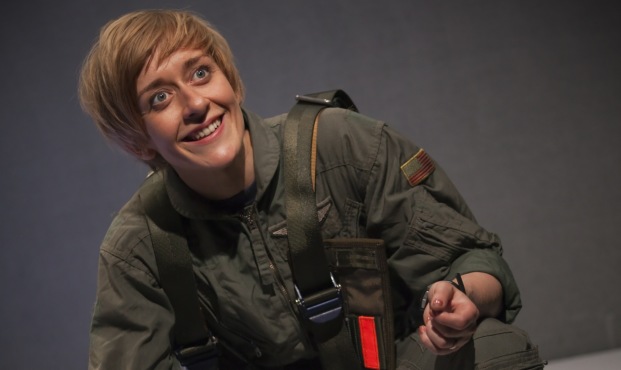 Grounded at the Gate | Theatre review

Take one moment to imagine The Odyssey if Odysseus came home at the end of every day. Or indeed, imagine this of any war. Such is the life of the former fighter pilot turned “Chair Force” UAV operative in George Brant’s electrifying one-woman show Grounded. After taking leave to have a rather unexpected baby, the pilot, played by a magnetic Lucy Ellinson, finds herself desperate to get back up into the blue. Her superiors though, have other ideas. Fighter pilots are old news, technology has moved on and it is now the drone operatives who are considered top of the heap – at least, this is what she tries to convince herself.

However, the reality of sitting in a trailer, staring at a grey screen for twelve hours a day, soon hits home, and it becomes impossible for Ellinson’s character to separate her work from her personal life. Whereas once she was distanced from the explosion and the causalities, now she must watch the action unfold on the little grey screen in front of her, as limbs and body parts fly up into the sky.

Ellinson completely embodies the role of this militaristic high-flyer. Mixing a top-of-the-class mentality with a swagger that says she is not only one of the boys, but superior to them as well, Ellinson shows us a woman who is Air Force to the core and desperate to do her job to the best of her ability.

Although this attitude means that she is unwilling to ask for help, it soon becomes clear that her two disparate lives are unravelling around her. Soon she is finding the all-seeing eye of the Reaper everywhere, from shop dressing rooms to the middle of the desert and it becomes increasingly hard for her to see the blessing in being able to return home at the end of each day.

Chris Haydon brilliantly directs Ellinson’s performance, and the mesh cube in which she stands for the whole performance reflects her mind-set well, becoming alternately trailer, desert and mental prison. This is a necessary and troubling depiction of the realities of modern warfare, a world in which war and family life sit side by side and surveillance culture has quite literally reached new heights.

Grounded is on at the Gate Theatre until 28th September 2013, for further information or to book, visit here.