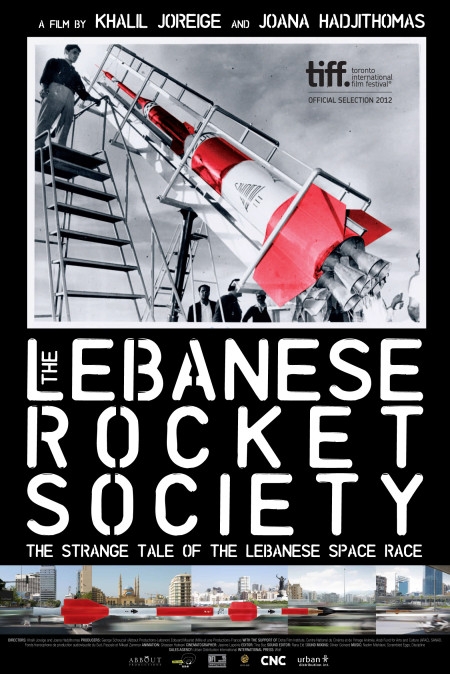 The words “that’s how I imagine it” from the supposedly well-informed directors of a documentary do not inspire confidence. In this film (by Joana Hadjithomas and Khalil Joreige) imagination counts for a great deal, as the closing seven-minute cartoon segment will attest. Propaganda is always distasteful, and it is a pity as this film’s subject seems a complete novelty. In 1960 Manoug Manougian, a mathematics professor at Haigazian University in Beirut, Lebanon began constructing rockets with his students on a shoestring budget, with increasing success and eventual state sponsorship.  The film segues into a wider history of Arab nationalism, uniting its dream with that of Middle Eastern space exploration. Manougian’s “idealistic” students knuckle down to their work while Soviet and US spies hatch plots – Lebanon was the only regional power conducting such experiments at this time.

When a rocket nearly hits Cyprus, the Lebanese program threatens to cause a storm at the UN. When Manougian decides to take his Masters in Texas, the Lebanese army moves in on the project, turning his idealistic dream into a covert military operation.  Shortly after this, the French ask Lebanon to halt the project. Why? The film doesn’t specify. Why does no-one remember the program’s test run?  Not the film’s strongest point.  Nor do Hadjithomas and Joreige explain why Manougian began constructing rockets in the first place, or why he chose Lebanon when more promising places were available. The movie gushes about dreams and ideals, but this doesn’t cover Manougian’s silence.

These silences are frustrating, particularly when the directors have made such a fuss about the dearth of historical material and the challenges they faced unearthing it. Every so often the dubbed voice of the director/narrator will say at some significant discovery: “Ah! It is indeed the…”

After the first hour the history lesson stops, and the directors, with nothing but a dream, commit themselves to reconstructing a “model” rocket (so they repeat) as a tribute at Haigazian’s campus. In the final scenes we see the model rocket taking off into an animated dream of Lebanon’s alternate history of space-based profit, in which high-tech cars massage rather than touch the ground.

The Lebanese Rocket Society was released on 18th October 2013.

Watch the trailer for The Lebanese Rocket Society here: