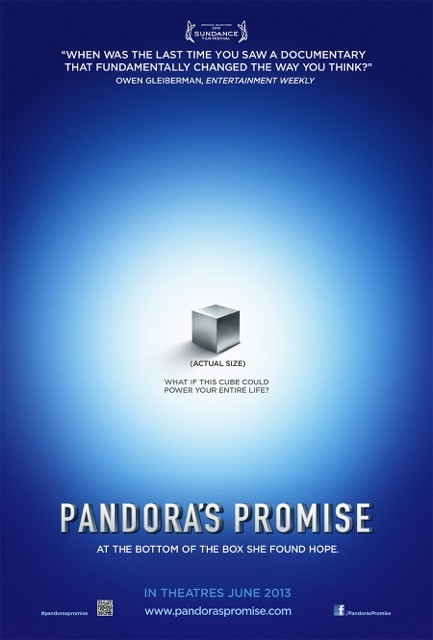 Controversy is on the agenda every day. They say this is why we are different from other beings: we are gifted with reasoning and endowed with free will… or at least that is how it should be. Pandora’s Promise is about being able to think for oneself, going beyond brainwashing and considering the possibility that what once was held as an absolute truth may only be an old myth. More precisely, the film is a documentary about nuclear power and debates the legitimacy of its use as an energy source. It alternates old footage with recent recordings through the statements of environmentalists, activists, nuclear weapons experts and nuclear pioneers. Taking stock of the situation from the outset to the present, retracing steps through historical landmarks (both good and bad), the likes of Gwyneth Cravens, Mark Lynas and Michael Shellenberger among others share their opinions on this prickly topic.

The controversy lies in the fact that some people have changed their minds over time and have therefore clashed with their own beliefs to become standard-bearers of what they used to despise. Little by little, those highly regarded journalists and scientists have shed light on nuclear power and climate change, virtually opening a Pandora’s box with the hope of giving us a new direction to re-evaluate our standpoints. Despite being widely considered a destroying force in the wake of disasters like the atomic bombs dropped on Hiroshima and Nagasaki during WWII, the explosion of a reactor in the Chernobyl plant in 1986 and the more recent one in Fukushima, nuclear power is now accepted as a necessary hazard.

Counter-culture icon Stewart Brand joins the battle against what seems to be misleading propaganda perpetrating the idea that nuclear power is negative and needless because there are better, healthier renewable options like wind or solar power. Adding his voice to the chorus of the repentant, former anti-nuclear activists, he aims to show us that nuclear power is actually safe and less harmful to our planet than fossil fuels. Nuclear pioneers including Koch and Till also contribute to furthering the cause.

Pandora’s Promise pledges to challenge and shake foundations, which it does but in the end it’s up to us whether we decide to agree with its alleged revelations on the theme or not. It’s thought-provoking but the real enemy is always inside of us and is called misinformation or, worse, indifference.

nut at The Shed | Theatre review
Original recipe of the week: Macaroni Pasty