Our Ajax at the Southwark Playhouse 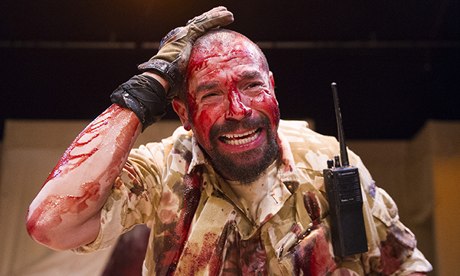 Our Ajax at the Southwark Playhouse | Theatre review

Inspired by Sophocles’ tragedy Ajax, Timberlake Wertenbaker’s latest play seeks to examine modern warfare’s affect on modern man’s mind. It does so with considerable success, juggernauted by a clutch of fine performances. Sophocles’ Ajax is often overlooked, set during the Trojan wars as the titular hero loses his mind and commits suicide after dishonourable treatment from his military superiors. Wertenbaker updates us to a non-specific war zone; there’s sand on the stage and the soldiers don desert khaki. This could be “Troy, Flanders, Basra, Helmand…[or any place] where time melts away.” Ajax and his men are “ten years into a war whose purpose [they’ve] forgotten”, surrounded by a hidden enemy and locals who are “civilians…but for how long, and who are they hiding?” This is Afghanistan writ large across a timeless scene of man’s struggles in warfare and the mental strain placed on soldierly brotherhood.

If this is all sounding a bit too high-minded fear not: there are guns and blood and guts aplenty in this very visceral story. The opening scene introduces the hero Ajax, dragging a ruined mess of a sheep’s corpse across stage – bloodied, rambling incoherently and mad behind the eyes.

Royal Shakespeare Company stalwart Joe Dixon’s central performance stomps all over the play. His muscular, gristled Ajax is every inch the inspirational leader his men see, and the terrifying madman they all fear. In Sophocles’ play a flower grows from Ajax’s suicide blood with the letters “AI” on its leaves – the initial letters of the warrior’s name but also a cry of lament. Mirroring this motif, Dixon’s wailsome mewling repeatedly brings the audience back to the central point of this play whenever they risk meandering elsewhere: this is a man losing his mind in war.

Frances Ashman as a twitchy Tecmessa and former comedian Adam Riches as an effete Odysseus provide welcome contrast to Dixon, and colour the story with alternative responses to the stresses of warfare. Wertenbaker has form with Greek tragedy and her script is appropriately curt, pithy and jumps back and forth between source material and references to YouTube, iPhones and the SA80-A2 rifle.

This jumping occasionally misses a beat: the closing dilemma of whether to honour the body of the dead Ajax doesn’t cut it in a modern mindset, and the addition of occasional humour into a stolid Greek tragedy sometimes feels misplaced. But for all that, this is a new play of rare Classical power.

Our Ajax is on at the Southwark Playhouse until 30th November 2013, for further information or to book visit here.