The Dead Wait at Park Theatre 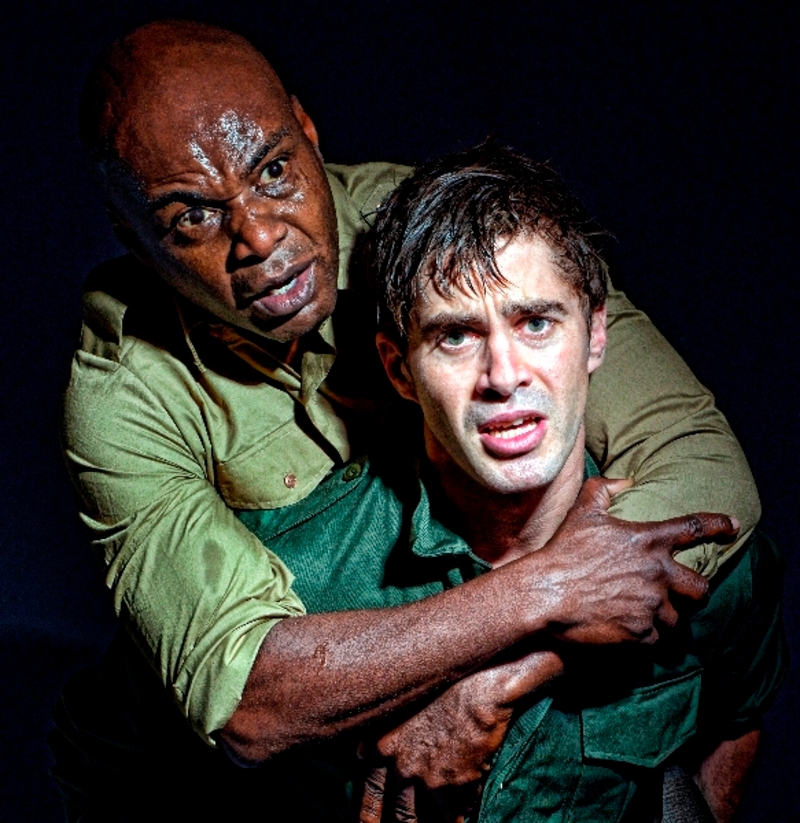 Joe Harmston’s production of The Dead Wait by Paul Herzberg successfully brings to life, on an all but empty stage, the physical and personal struggle of two enemies at war in South Africa in 1989. It is an insightful and provocative depiction of how the atrocities of the Angolan Bush War changed the lives of individuals forever. When conscript Josh Gilmore and his commanding officer Papa Louw find the injured freedom fighter George Jozana among the wreckage of an Angolan village, Papa mercilessly forces Josh to carry their captive on his back to the border. Along their intimate journey – marked by enemy threats and episodes of torturous interrogation by the commander – the pair develops a connection that Papa is intent on destroying. Left with the agonising decision to defy orders and face imminent reprimand or to betray a new comrade, the consequences will haunt Josh for years to come.

Honest and engaging, Maynard Eziashi is convincing and captivating as George. The relaxed pace at which he speaks and the light humour he shares, despite devastating circumstances, create a wise, profound and sympathetic character. His mannerisms, pride and admiration for his daughter add greater depth to the portrayal of this remorseful father.

While Austin Hardiman is charming and charismatic as Josh, some of his more emotional scenes are exaggerated at times, providing a distracting break during otherwise intense moments. Despite this, the energy and determination with which Hardiman portrays this character on such a mission drives the performance.

Adelayo Adedayo gives a powerful supporting performance as George’s daughter Lily. She creates a strong and forthright female character, candid about the difficulties she has endured in her upbringing and adult life. Her cold demeanour when asked for forgiveness epitomises a woman fraught with anger and resentment – her performance stills the theatre.

Though the subject matter is stimulating, the play’s conclusion – a recurring song playing one last time – is somewhat predictable and threatens the realistic element of the production. Nevertheless, The Dead Wait is an imaginative piece that challenges perceptions of the afterlife and the choices that lead us there.

The Dead Wait is on at Park Theatre until 1st December 2013, for further information or to book visit here.