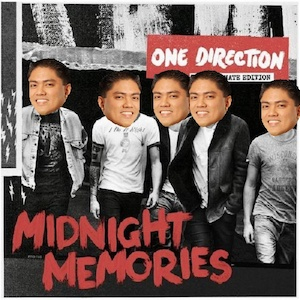 One Direction are possibly the biggest pop group in the world right now. They’ve played arenas all over the world and their fan base seem to be capable of world domination. Unfortunately, because of the hype, their music can go unnoticed. Their latest album, Midnight Memories is inevitably a chart-topper, and you wouldn’t be blamed for assuming that this is simply down to the myriad of teenage girls storming into every record store across England as soon as the album hits the shelves. However, the album is a serious step up from their previous releases Take Me Home and Up All Night. The boys seem to have grown up, and this is evident from their music. The record begins with lead single Best Song Ever, which is admittedly quite saccharine-sweet, the cheesy pop that we all associate with One Direction, but as soon as we reach songs such as Little Black Dress, it’s evident that the boys have taken a definite turn for the rockier side of things. Either that, or they’ve been raiding their parents’ record collections and discovered the Rolling Stones. Either way, it sounds good and it’s going to sound even better filling the stadiums on One Direction’s next UK tour in 2014. Other highlight are Ryan Tedder-penned ballad Right Now, Gary Lightbody’s midtempo Something Great, and Through the Dark which has even influences from Mumford and Sons and is a refreshing step away from how you think a One Direction song would sound.

Admitting that you like One Direction is a risky business, as most people may assume that you enjoy running through hotel corridors searching for Zayn Malik’s bedroom or crying outside Wembley Arena with an I Love Harry Styles hoodie wrapped around your shoulders. However, with the release of Midnight Memories this stereotype might change as One Direction attempt to take a step away from the X Factor stage and towards being a genuinely reputable band.

Midnight Memories is released on 25th November 2013, for further information or to order the album click here.

Watch the video for Story of My Life here: