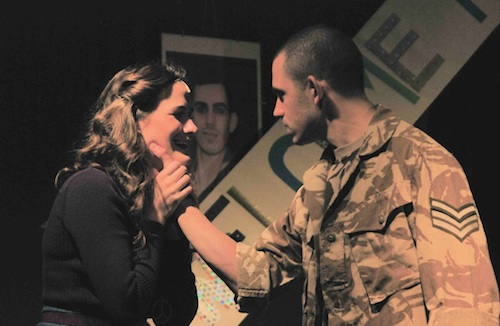 Shellshock is the story of what happens when good people see bad things and are forced to face it for the rest of their lives. Bringing to life the staggering truth of what impact war and violence have on love, life and loss, this production tells the daunting tale of John (Simeon John-Wake), a recent war veteran whose return home has shaken the lives of his doting wife Mary (Annie Kirkman) and child Emily (Ana Martin). Side by side, Ada (Maggie Robson) is now a grandmother to teacher Mark (Peter Willoughby), a lady who loved a similar man in years gone by.

Set in 1975, the stage painted the scene of a home denigrated to a mere house, with its walls being visibly stripped of their love and laughter. Delivered to the tune of a live band, the production boasted 14 original songs chronicling the trials and tribulations of love, hope and sanity lost to the pain and bloodshed of WWI. While slightly anecdotal, this production brought us into the lives and minds of those suffering with PTSD, as well as the loved ones affected. Martin delivered a brilliant performance as a little girl lost, coming to terms with the fall of her hero, while Kirkman conveyed a genuine conviction in her husband’s eventual return to form.

While the overall show was strong, the message was sometimes lost in a slightly ineffective lateral storyline – which would have been avoidable if further pursued or left out entirely. All in all, though, writer Tim Thomas and director Matthew Gould managed to render an insightful production full of emotion and perfect nuances. This story is often untold, and light has deservedly been shed on it.

Shellshock is on at Waterloo East Theatre until 19th April 2014, for further information or to book visit here.