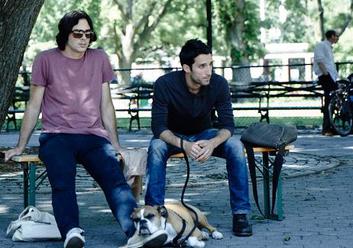 Names like Marisa Tomei and Sam Rockwell cause indie film lovers to rush into theater seats. Their underappreciated acting ability is synonymous with the pleasant personalities obvious in each performance. Director Adam Rapp’s latest effort, Loitering with Intent, finally sees these two darlings on the same screen. The question is: can they live up to audience (and devotee) expectation? Loitering with Intent follows struggling New York screenwriters Raffael and Dominic. Nearing 40, the two are still laboring for that big break. One day, they are approached with an offer to fund the filming of an unpublished – and currently unwritten – screenplay. The only catch is the deadline: it must be completed in ten days. In an effort to focus, the two leave the city for Dominic’s sister’s home in upstate New York. Unfortunately, the solitude Dominic and Raffael desperately search for is not so empty.

The preliminary plot of Loitering with Intent promises the journey of two screenwriters on a mission to achieve a celebrated (and sellable) script. After the arrival at the upstate home, though, this objective is muddled with smaller, subsidiary conflicts. Eccentricity is and should be the goal of independent filmmaking – but cohesive competence is never overrated. Loitering with Intent suffers fatally from a conflation of peripheral elements that results in tedious congestion.

Rockwell and Tomei, while characteristically charming, are a part of these tangential ingredients. As Michael, a clearly traumatized war veteran, Rockwell is involved in too little screen time for adequate effect. His alluded presence offscreen is greater than the final product. Tomei, allowed a greater role, is actually the most resonating character in the film. This is due to the unconscious failure of narrative focus – a small, but substantial silver lining.

Loitering with Intent is a comedy that concludes with hardly a murmur of laughter. The writing is too cryptic and contrived for even invested viewers to enjoy. Rockwell and Tomei, while typically on point, remain lost in a directionless narrative and even worse, a purposeless film.