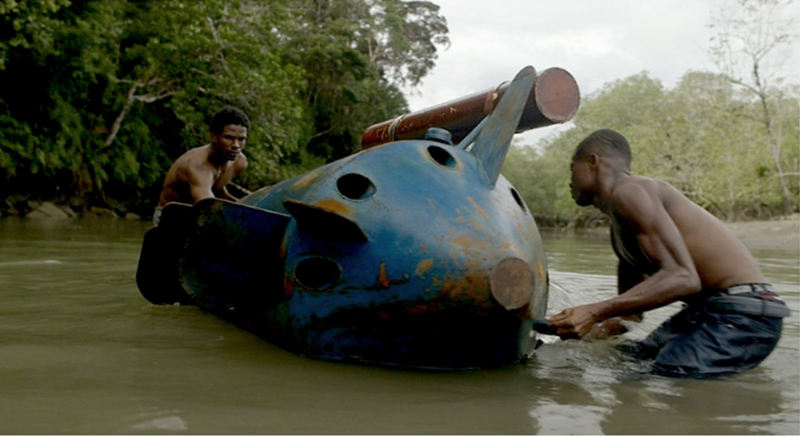 Manos Sucias may be the premier Colombia road movie. Two brothers are sent on a winding mission to deliver a torpedo to a local gangster and, as expected, a bond is formed. In his debut, director Josef Wladyka with the help of executive producer Spike Lee, attempts to show audiences this touching family affair inside a war-torn country. Delio and Jacobo are brothers that rarely see one another. Even in the small, devastatingly poor village of Buenaventura, their paths rarely cross. Yet one day, the two are unsuspectingly hired to transport a torpedo across hundreds of miles of Pacific ocean for a local drug cartel. Agitated at first, the two soon realize the importance of family – and how perilous their mission is.

Manos Sucias is predominately led by Cristian Advincula and Jarlin Martinez. The former produces a better effect than his counterpart, but the two are pleasantly dependent. Reformed familial relationships are best shown during crisis. The conflict experienced by the brothers is not fabricated, but the reality of contemporary Colombia. Though the film may project typical themes, the story – and haunting conclusion – are done with purpose. Director Wladyka is right in emphasizing this crucial detail.

Executively produced by Spike Lee, presumptions immediately entrench opinion. The director’s latter career has provided more missteps than productions to praise. Yet, it is undeniable that Manos Sucias benefits from Lee’s involvement. The provided economic subsidization proved an ample cinematic gift. Audiences are rarely privy to the solemn reality of Colombia. With the keen eye of Wladyka, these two present not simply an impoverished country separated by internal strife, but the lush landscape that encapsulates it. Such foresight into the results of a new director is the trait of an intelligent film-maker.

Hopefully Manos Sucias will contend for a theatrical run, because it certainly deserves our attention.