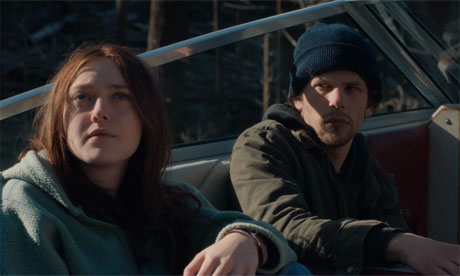 Night Moves presents indie stars Jesse Eisenberg, Dakota Fanning and Peter Sarsgaard as extremist environmentalists plotting to destroy a dam in the Pacific Northwest. Under the direction of Kelly Reichardt, known for her “minimalist cinema”, the film promises to investigate the pleasures and pain of willed isolation. Josh and Dena are disgusted by the slow destruction of their Pacific Northwest surroundings. “Over 50 golf courses cover our 10-mile radius,” one bitterly observes. The anguish finally ascends to a breaking point. Together with Harmon, Josh’s questionable friend, the three devise a plan to blow up a nearby dam. But will they be able to live with the consequences?

Minimalist films are what the name suggests: little dialogue, action or plot. When done correctly, these aspects are not added pejoratively. Thankfully, Reichardt is an erudite film-maker. Like previous films Old Joy and Wendy and Lucy, the narratives revolve around the isolated atmosphere of the Pacific Northwest. Full of images of a secluded and depleted Washington state, Night Moves proves no different. While these images adequately fulfill the film’s intent, Reichardt succeeds even further with a well-constructed love triangle. And like all romantic struggles in fiction, someone is bound to get hurt.

While likeable, Eisenberg is falling into a type: terse demeanor is becoming the sole descriptor of his skill. Sarsgaard, though softer and more comedic in approach, is already suffering a similar fate. Fanning, though, strides in the indie circuit. Still transitioning from her adolescent fame, viewers hope she will stay out of mainstream mediocrity. Despite performances that barely meet expectations, the chemistry orchestrated by the director is superb.

Night Moves is a slow-tempo radical plea. While consequences weigh heavy on the characters, their ambition does not. It is easy to sympathize with the cause presented by Reichardt. Though predestined to be seen by a small audience, one hopes Night Moves will receive a deserving national release.