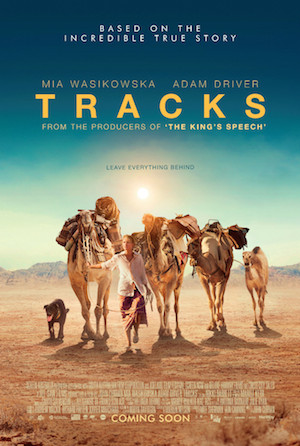 Tracks is the tale of a young Australian loner who wants to prove that anyone can do anything. Inspired by her father’s African crossing, she decides to cross over 2,000 miles of deserts just with three camels and her faithful dog Diggity.

Robyn (Mia Wasikowska) works hard but struggles to raise the necessary money, however, her journey is unexpectedly sponsored by the National Geographic; the magazine accepts on one condition: a photographer has to join her at regular intervals.

Directed by John Curran (Stone, The Painted Veil), Tracks is a personal, profound drama based on a biographical book of the same name by Robyn Davidson. Through its clean but emotional cinematography, and with the support of a heartfelt soundtrack, the film perfectly communicates the precarious balance between the roughness and sensitivity of the lead character, the animals and the landscapes.

Robyn is confused about her life, her relationship with people and with herself. Spoken communication scares her, she empathises with animals and aboriginal people who do not speak English. Her only certainty is this trip, and it’s guiding her to an adventure that is mostly a path of self-discovery.

Tracks is more than a movie, it’s a physical and emotional journey not to be missed.

Watch a clip from Tracks here: