Benvenuto Cellini at the Coliseum 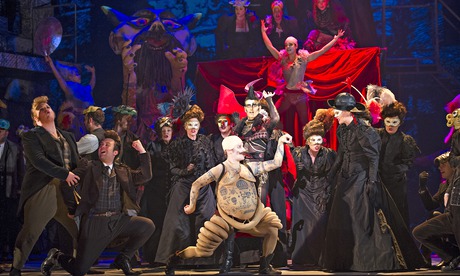 This opera by Berlioz is seldom staged for various reasons: it’s brilliant and flawed, uneven and difficult to produce. Even the composer felt that the libretto was lacking essential ingredients, but he liked it, and there is enough drama to match his wonderful orchestrations. The music is rich and full of surprises, the singing parts virtuosic, and the twists and turns of the plot worthy of any theatre. 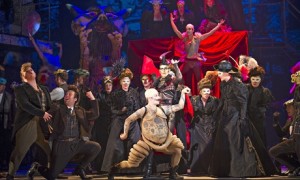 It takes a great imagination to successfully realise on stage, and so who better than Terry Gilliam, the American animator member of Monty Python who has a talent for creative productions of complicated stories? His distinctive vision has given life to films such as Brazil, The Adventures of Baron Munchausen and The Imaginarium of Doctor Parnassus. Gilliam’s sense of the bizarre perfectly matches this not-quite-serious opera about the life of the great Renaissance sculptor Cellini, mixing together biographical and fictional elements.

Cellini is rather a rogue, hard-living character, in love with the betrothed of a rival sculptor. What is more, he makes a seemingly impossible deal with the Pope to produce a giant gold masterpiece with little time and materials in return of absolution from various misdemeanours, including a drunken murder. Teresa, the girl whom Cellini loves, has an additional conflict in that her father disapproves of Cellini, while rival Fieramosca bears the brunt of everyone’s revenge, being rather a hapless and comic villain.

Set in Renaissance Rome, the background is the Mardi Gras, the dangerous time of carnival when passions flare and morals are inverted. This allows Gilliam to fulfil considerable expectations in surprising, delighting and thrilling the audience. The entrance of the Pope, the great bass-baritone Willard White, in the second half is the most truly Python-esque moment in the production, and a wonder to behold. Corinne Winters as Teresa shines among a charismatic cast.

This is Gilliams’ second direction for English National Opera, and with circus skills, fire eating and masks, there are many treats for the audience. ENO sing in English and the translation by Charles Hart is full of humour in this glorious mash-up where art trumps all.

Benvenuto Cellini is at the Coliseum until 27th June 2014, for further information visit here.