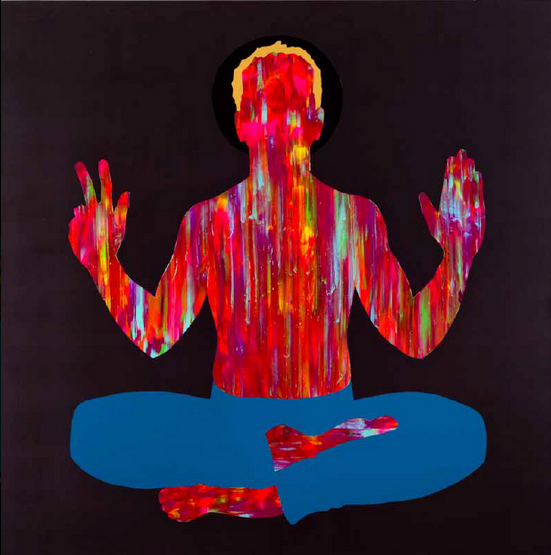 Spanish–born painter Pedro Paricio is currently exhibiting a new body of work entitled Shaman at Halcyon Gallery on New Bond Street. The show comprises of twenty five new paintings, all of which are bold, graphic and colourful. The work is playful and fun in parts but the press release for the exhibition is an exercise in gross overstatement: there is a great disparity between the artist’s aims and his actual achievements. We are told that Paricio is “exploring in depth the tangible and sensory connection of the body to the spiritual world” yet what we are presented with are stencilled paintings of the artist sitting cross-legged with his shirt off and self-portraits un-ironically titled Icon.

Since 2011, Paricio has been depicting himself in almost all of his compositions; he adopts a uniform of a black fedora, suit and tie which he seems to rarely deviate from (he wears it in all his press shots). Throughout the show we see Paricio take on an array of roles in his paintings: he leaps through the air, pokes a tarantula, totes a spear and lion mask, projectile vomits and acts out the Greek myths of Sisyphus and Atlas, carrying immense weights on his shoulders. We are informed that the show partly explores the religious practices of the Guanches, the original inhabitants of Paricio’s native Canary Islands.

The exhibition demonstrates a formulaic and rigid approach to painting; here we see just a few techniques constantly rehashed across the entire body of work. There is little risk-taking and for the most part his forms are rendered in flat colour with hard, masked edges and little trace of brushwork. Often he fills sections of the image with multi-coloured geometric shapes that act as a wallpaper or backdrop. The squeegee technique (a nod to Gerhard Richter) is primarily applied to the skin of the subject in fluorescent paint and is perhaps intended to represent the artist’s soul or aura.

Although Shaman may be a disappointing show, some of Paricio’s earlier paintings are actually quite accomplished. The work from 2009 and 2010 on his website displays a much more sensitive handling of paint and suggests more intriguing, open-ended narratives without attempting to prescribe meaning. Some of the hard, graphic elements are present, but here they are countered with softer brushwork and deeper illusory space – this seems to be where Paricio is at his best. 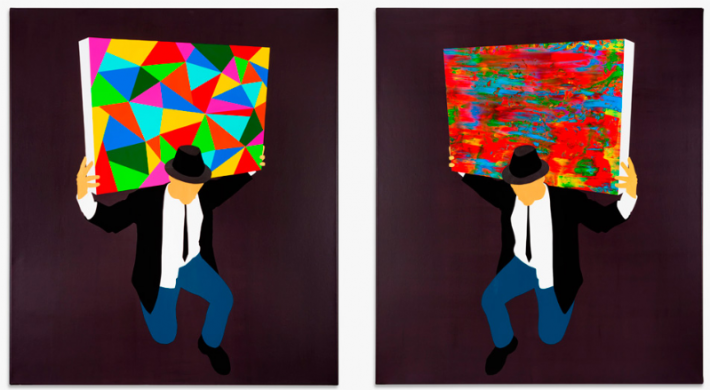 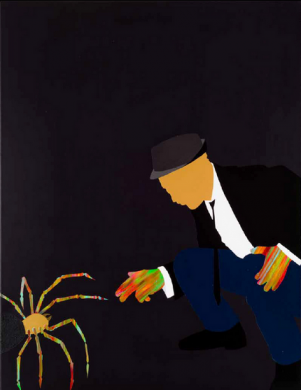 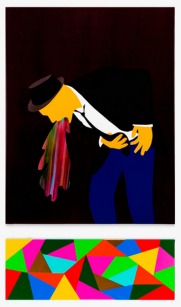 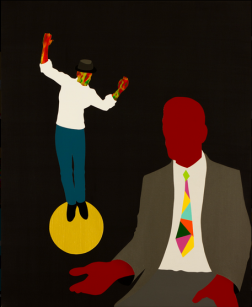 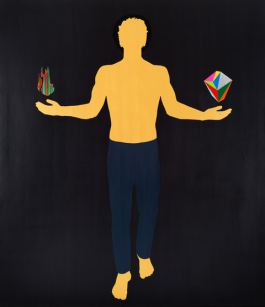 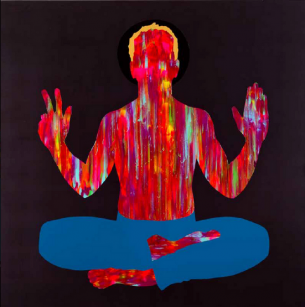