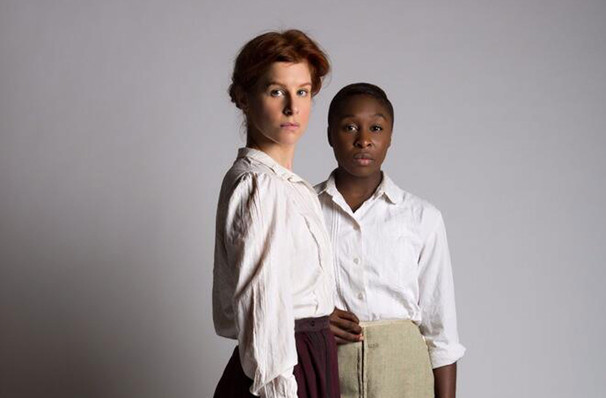 Dessa Rose is the vibrant story of two women and their lives in the 19th century, in the southern states of America, led by director Andrew Keates. The story is narrated by the elder versions of the pair, played by Cynthia Erivo and Cassidy Janson. The tale takes off when the young slave girl Dessa falls in love and ends up expecting a child. Circumstances lead her to kill her owner in a fight when he tries to rape her, and she starts a rebellion. She finds herself imprisoned, waiting to meet the gallows as soon as she has conceived. With the help of old friends, she manages to escape and while on the run she encounters the young mother Ruth, who has been left alone by her husband to take care of the farm and their baby. Dessa’s experience with white people first leads to hostile relations between the two of them, but soon their enmity is instead transformed into friendship.

The small Trafalgar Studios may seem like an odd space for a musical, but instead it proves an amazing platform to create intimacy and vivid storytelling. The need for microphones is almost redundant, the voices you hear are not processed through a sound system: this is how every musical should be. Big productions do not necessarily mean better productions. The team has created a wonderful scenography, that with very little material and space manages to change for every scene.

Erivo has the leading role, and she is the well-deserved star of the night. Her voice has the ability to keep the viewer completely focused. It’s not easy for Janson to keep up with her, but she puts on a moving performance, especially when she heartbreakingly sings a song sending a mental message to her disappeared husband.

The musical begins rather dire with trauma and drama, taking a lighter approach at the end, heart-warming with more laughs. It pitches versatility from the actors, and delivers both heartbreaking moments as well as warming scenes to level it up. All in all, it is a well-played musical with lovely songs, good actors and great scenography.

Dessa Rose is on at Trafalgar Studios until 30th August 2014, for further information or to book visit here.