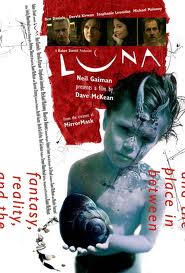 With its earthy palettes and dulcet tones, Luna follows a couple visiting an old friend and his new girlfriend after the loss of their baby through

traditional narrative and dream-like sequences. In both colour and charisma, beige is the overriding theme of this movie. This is the third feature by artist turned director Dave McKean, and don’t you know it. It’s unclear whether the direction or the script is constantly bringing the momentum of this movie to a grinding halt.

The grieving couple are played by Ben Daniels and Dervla Kirwan, who give equally engaging performances and were, to some extent, the highlight of the film. The notion of understanding what it’s like to lose a child is brought up in the movie, and was no doubt a challenge for the two actors. The dominant emotion in the film is grief, so in this sense, they succeeded. Stephanie Leonidas and Michael Maloney play the couple whom they visit.

The artistic interludes and experimentation in this film added little value to the actual narrative, and if the same attention was paid to the script as to the animations, perhaps they would have had a different effect. What was most lacking was the subtext one might expect in the performance of such an emotive topic. At various points one finds oneself shocked at the brazenness of characters to speak to their own neurosis as if they had any perspective. It was this, rather than the bizarre incongruous animation sequences, that distanced the story from reality.

Despite this, there is definitely something to be said for the setting of the film. The movie almost entirely takes place within the house or the woods and beach surrounding. The contrast between the claustrophobic closeness of the house and the extensiveness of the outdoors is one of the more interesting and refreshing features.

Just by reading the briefest synopsis of this film you know it’s not going to be cheerful. But it can be said that this film is not by any means morose or difficult to sit through. The constant contrasts (for better or worse) make for a pleasant watch.

Watch the trailer for Luna here: