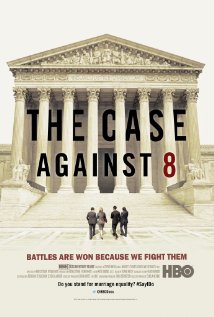 The Case Against 8 | Movie review

“Gay, straight, black, white; marriage is a civil right”: The Case Against 8 takes us on a legal and, more prominently, emotional journey to the current state of legal same-sex marriage in California. It is difficult to put into words the complications and turmoil that led to this decision, but this documentary does an excellent job of presenting the case factually, while shattering the heart. Civil rights issues on film are often either brushed over or canonised, but here there’s an excellent balance between morality and sentimentality.

The footage follows the legal team to overthrow Proposition 8 (to ban same-sex marriage in California), which passed in 2008, all the way to the final 2013 resolution. In that time we are made very aware of the how slowly the cogs of judiciary system turn. The weight and importance of this battle is never lost on the legal time, or on us and every twist and turn is significant. Directors Ben Cotner and Ryan White weave a story of injustice and unconstitutional discrimination that would rile up almost anyone. The appeal system meant that there was distinct lack of swelling moments, which reminded us all to remain “cautiously optimistic” as one of the plaintiffs called it.

But it’s not in the swells of joy or pits of desperation that this film triumphs, rather in the subtle and intimate conversations between the two plaintiff couples and their lawyers, where the heart behind the fight is exposed. One would challenge the most conservative to watch this and now feel some sense of sympathy for this whole section of society stripped of basic civil rights, and this film goes a long way to arguing their side without protests and parades.

Something definitely has to be said for the way in which the opposition was presented. There is no doubt that plenty of footage was left on the cutting room floor of religious activists and those opposed to equal marriage barraging the couples and aggressively pushing against this argument. But these shots were used sparingly, meaning that there was no villain here, no one person who we are led to hate. This is the mark of a truly great documentary, and here the class and precision used to display this argument was exceptional.

As a factual documentary about a legal case, this film serves its purpose well. But as an account of an extraordinary story of sorrow and triumph, The Case Against 8 anchors us in the heart behind what is a landmark case in history.

The Case Against 8 is released nationwide on 7th November 2014.

Watch the trailer for The Case Against 8 here: