Adam’s Eve at the Drayton Arms 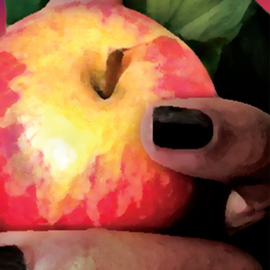 The new play by Simon David, Adam’s Eve at the Drayton Arms Theatre, is a modern interpretation of the fall from the Garden of Eden. Performed by the Blued Ink Theatre Company, Adam’s Eve depicts a number of situations and events, observing the relationships between characters as they attempt to comprehend and connect with one another.

Directed by Simon David, the play is a loose interpretation of the biblical story, with a free-flowing, improvisational feel that takes you on a journey with the characters. The first half is divided into seven scenes, representing creation, while the second half contemplates and processes the action from the first. The action is based around four main characters: Imogen, played by Holly McFarlane, Adam (Jonathan McGarrity), Eve (Ayesha Casely-Hayford), and Lucian (Andre Goncalves). The actors perform with a certain intensity; Holly McFarlane and Ayesha Casely-Hayford are particularly impressive. Their characters transform from the first half to the second into fully-functioning and complete individuals – carefree, naïve newlywed Imogen, and sexual goddess Eve.

Each scene explores the characters’ commitment, intimacy and lack of communication, represented in an ongoing arc of moments, dialogue and scenes. Whilst the discourse attempts to locate and understand relationships, the plot becomes quite tragic – towards the end, Imogen is left with only a lit candle to represent Adam. Moments of touch represent connection and understanding. Music is performed, from behind a veil, by Karin Fransson, the guitar parts and viola fluctuating with the mood and dynamics like the gods overseeing and responding to events.

Adam’s Eve is intense, enigmatic, multifaceted and varied, and leaves us with a sense of liberation. Freedom triumphs over the chaos and bewilderment of the relationships, as we search for the “light” and look forward to the plot’s progression as ideas are developed further and the words of the characters find their rhythm. The production is sold-out and scheduled for a second run, which will be performed at the Drayton Arms in February.

Adam’s Eve is on at the Drayton Arms Theatre until 3rd November, for further information or to book visit here.