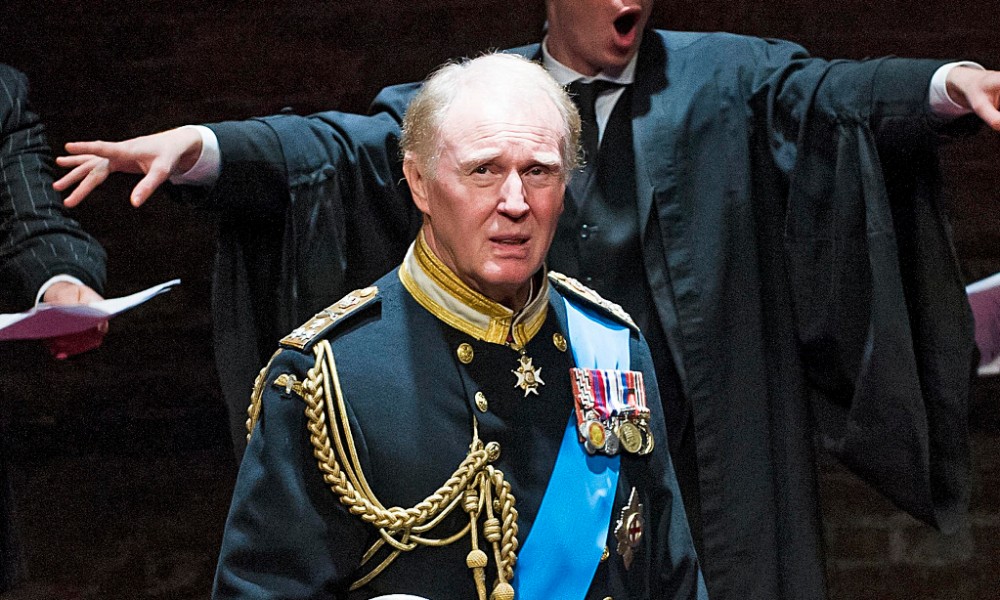 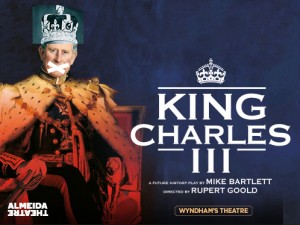 Mike Bartlett’s King Charles III is currently playing at the Wyndham’s Theatre in Leicester Square, having transferred from the Almeida in Islington. It’s an edgier affair than most offerings in the heart of the West End, imagining a near-future where Prince Charles takes the throne to embark on a disastrous and destructive period of misrule.

Adam James’ smarmy Prime Minister comes to Charles, played by Tim Pigott-Smith, asking for the royal signature on a new bill designed to limit the freedom of the post-Leveson press. It’s an ancient tradition, but no more than a formality. The monarch is expected to sign whatever bill is placed in front of him unquestioningly, carrying out a merely symbolic role as final arbiter of the rule of the land.

But Charles is concerned by the bill and resolves not to sign until amendments are made. Though technically within his royal rights, his refusal to sign and the ensuing developments shock the parliament and the population and divide the nation, bringing it to the brink of civil war.

Charles is brilliantly played by Pigott-Smith, who presents the prince as a man possessing true integrity and conviction, yet dangerously embittered by the ultimate truth of his powerlessness. He is determined to make his mark, and is seduced by a very Shakespearean apparition, promising him a legacy as “England’s greatest king”.

William, Kate, Camilla and Harry are all present, in various twisted forms. Harry is a naïve playboy, who has a crisis of conscience when he meets radical republican Jess. He longs to break free from the stiff, regimented life that awaits him and is delighted when Jess takes him on a tour of “normal” places like Sainsbury’s and the Tube. William and Kate are calculating, clinical and media-savvy, performing their parts like chess-players contemplating every move, while Camilla is passionate and hysterical, offering unwavering, if misguided, support for her husband.

The dialogue is rich and complex throughout, with moments of grand, Elizabethan drama and thoughtful soliloquies from the principal characters. It’s Richard III, it’s Macbeth, it’s brilliant. It’s funny too. Every character is given time to develop, with their own hopes and desires neatly sketched out. No character is good or evil, and the play’s refusal to cast judgment on such divisive material is to its strength, as it forces us to scrutinise our own perceptions.

King Charles III is a rare thing: a play that’s tackles a controversial subject without being hectoring or dogmatic. If you only see one play next year, make it this one.

King Charles III is on at the Wyndham’s Theatre until 31st January 2015, for further information or to book visit here.