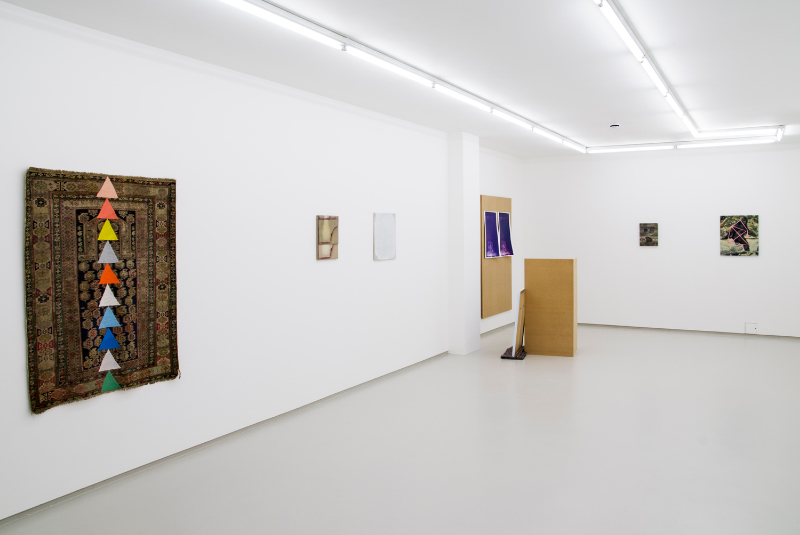 Promise of Palm Trees is a reference to the idea of pursuing something but never quite being able to attain it. Eight new and established artists here use diverse methods to interpret the idea of hidden promise.

This theme runs throughout all the pieces on show at Breese Little Gallery, which all present obscured images to varying degrees, thus changing what one sees of them. For the viewer, this forces an investigation into the works to try to reveal their concealed meanings.

Charlie Billingham’s Bum 14 is almost grotesque in its quivering paint splashes, which form a Regency bum having his britches tugged up. The vibrant rouge bottom immediately attracts attention, but the muted greens and blues create a world around the main figure that is perhaps of more interest. Benjamin Brett’s Inside Outside, then, uses oil on linen to produce a textured haunting image. It questions whether it’s a ghostly face staring out at the audience, or a mask to look through into a dark distant world. Jack Brindley continues the eerie theme using repetitive screen printing to bury the original image until what becomes visible are indecipherable shrouded objects.

Benjamin Cohen uses the classic unclear image of Bigfoot in his piece Yeti, covered with a bright pink unicursal pattern. This immediately makes the viewer attempt to solve the riddle, perhaps reflecting the ever puzzling myth of Bigfoot, now caged behind the house-like structure.

Meanwhile, Clem Crosby creates dizzying purple swirls in How Not to Be Wrong, which very cleverly shows that the best way to not be wrong is to cover up the flaws. In turn, there is some method in the madness with uniformity and pattern emerging. Fiona Curran’s own coloured triangles leading up an old Persian rug contrast their brightness with the aging patterns of the carpet. Now marked by the paint, does this damage the rug, or bring out its delicate detail by comparison?

In Picture, Damien Flood uses lines to create bars across the centre of the painting, but perhaps it is in fact the lines themselves that are imprisoned. It’s almost as though some parts have been licked out of the hectic broad black brush strokes in Aimée Parrott’s Licker. Like something that has been covered up is trying to claw its way out.

As a whole, Promise of Paradise allows for intense investigation, while still leaving so much unanswered.