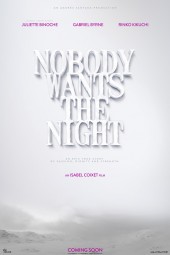 It’s easy to forget, or at least ignore, just how harsh some places in this world really are. This is a reality that Spanish director Isabel Coixet brings to life in the opening scenes of her latest period drama Nobody Wants the Night. Long panning shots express the brutality and beauty of the icy landscape that is the setting for this tortuous tale, inspired by true events.

At the beginning of the 20th century, explorer Robert Peary set out on what was to be the culmination of his life’s work. Peary led the first expedition to successfully reach the North Pole. What he did not preempt was that his self-confident and bold wife Josephine (played by Julie Binoche) would follow him there, taking on the daring route to catch her husband and share the accomplishment.

Binoche is exquisite as the uncompromising and rogue lady of high society. The journey she embarks upon is treacherous and unforgiving, made apparent by some inspiring work behind the camera from Jean-Claude Larrieu (Paris, Je T’aime, Elegy).

Once at the final known camp of Lieutenant Peary, Josephine is faced with the sad realisation that her husband has developed a special bond with a young Inuit woman, Alakka (Rinko Kikuchi). This sparks a chilling examination into the love Josephine thought was so pure, followed by an agonising wait for her husband in the brutality of the Arctic winter.

The film, while at times hopeless and cold, keeps the audience involved throughout. With an epic score from Lucas Vidal, it’s hard to not get caught up in Josephine’s desperation, and her greater journey of self-discovery. Coixat has broached an interesting subject matter in this Berlinale opening piece, showing two women brought together by the same man, but ultimately drawn to each other in a lonely tale of survival out on the ice.

Nobody Wants the Night does not yet have a UK release date.

Watch the trailer for Nobody Wants the Night here:

Related Itemsberlinale 2015nobody wants the night