Every Thing Will Be Fine: An interview with James Franco 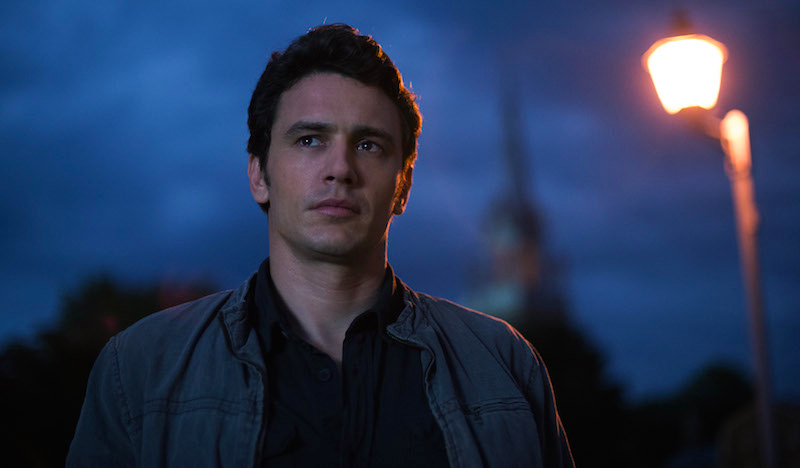 Every Thing Will Be Fine: An interview with James Franco

Every Thing Will Be Fine premiered at the Berlin Film Festival 2015, here’s an interview with James Franco.

What prompted you to accept the role of Tomas?

I have been a fan of Wim’s work for a long, long time, and I heard he was doing a movie from my agent and that he wanted to meet me. He said he would fly into New York from Berlin for ten hours just to see me. I was teaching that day at NYU and he said he wanted to come to my class. So, he came and observed my graduate film class and my film students and even gave some notes on the scripts that they were all working on together. After my class, we went back to the Mercer Hotel and had dinner and I interviewed him for about 1 or two hours for US Playboy. We didn’t even get close to covering all the movies or all the stories that he could tell me about. But it was a very good interview, and he was so forthcoming and gracious as an interviewer. I was pretty much sold: that it was Wim, it sounded like an interesting journey and I liked the approach. These are all the things that add up to the music of what a film is going to feel like. The script felt almost novelistic, it covered a long period of time, the cause and effects of things were much subtler than in most movies. It felt more like a portrait of a life than a very plot-driven movie. It was working in certain ways or elisions where each chapter jumps years, and sometimes two or three years, where things happen and the audience has to catch up. And then the last thing that was interesting for me was that he was planning on a very slow drama in 3D. Wim said that it’s an attempt to reveal the characters’ soul. Normally, 3D is used in huge spectacle films to enhance the action of the spectacle, but here it is in a very meditated film. Wim’s wife, Donata, said it felt more like reality because we see our world in 3D. The film wasn’t throwing a million things at you in 3D, it felt more like looking at the world. How would you describe Tomas?

Tomas is a writer, a novelist, and he is a little reserved. He lives the life of the mind, and does most of his intense living in his writing. We find him at the beginning of the film in a relationship that is not going so well: his first girlfriend is played by Rachel McAdams, and I’m having a hard time understanding why Tomas doesn’t like her more. And then Tomas’s world is really turned upside down because of an accident when he kills the boy with his car. It’s probably not his fault, but the incident is so upsetting that it turns Tomas’s life upside down and initiates a bunch of changes in his life. He breaks up with his girlfriend, he finds a new person in his life, and he’s told that his books are getting better since the accident. It could be that he is just becoming a better writer because he is more experienced and working hard at it – or it could be the accident. One of the nice things about the movie is that it’s not such a direct kind of psychological study of somebody going through a traumatic experience as much as it is about many different kinds of experiences and how all different levels of experience can shape a person’s life.

How would you describe Tomas’s relationship which is going on secretly with Kate and Christopher?

There are many kinds of strains in the film. Tomas happens to go down a random road and he ends up having the accident with the kid and that leads to a death. But it also leads to this other strange unexpected door into the life and world of the dead child’s mother and brother. That’s a very strange and bleak way to meet people, but the reactions of Kate, played by Charlotte Gainsbourg, and Christopher, are unexpected. They are very spiritual characters in a way, she almost takes more care of Tomas than he does of her even if he is the one who caused all the damage; she sees the accident as no one’s fault in a very enlightened way. And then Christopher grows up knowing that his brother was killed by this man in an accident and becomes in a way obsessed with Tomas, he reads all his books and projects a lot onto Tomas. A strange sort of father-son bond is created even though the only real connection is this horrible accident. What is the essence of “Every Thing Will Be Fine” for you personally?

Do you believe that tragedies can lead to something positive in the long term?

Sure. I wrote a book called Palo Alto, and there is a character in there who is getting into a lot of trouble, and I can remember when I was a teenager getting into quite a bit of trouble. I grew up in a very nice place, so the trouble I was getting into wasn’t too bad, but it kept happening. At the time, it almost felt like I was a magnet for the police – I couldn’t do anything and not get caught, it seemed like my life was really taking a wrong turn. But, in fact, almost twenty years down the road, I can see that all of that set me on the road to acting, literature and art when I was getting into all that trouble. Somehow, I needed to go through all that so that I could then say: Okay, I’m done with that behaviour, I’m going to put my energy into something else.

What is special about working with Wim Wenders?

I love working with Wim. First of all, it’s a very kind of slow methodical process. Not as far as the acting goes, but as far as the set ups go, partly because we were shooting in 3D. I was preparing for my oral exams, so I had to read lots of books and I read almost a book a day every day because we had so much time between set ups. Wim is such a reader that, from day one, he was very supportive of my reading and always found a nice comfortable couch or something like that for me on set to read. In a lot of senses, I feel like Wim and I are very similar: we both love literature and a lot of the same writers. William Faulkner is his favourite writer, and he’s even putting this into some of his movies: there is a copy of Light in August in the back of a car in Paris, Texas and the Charlotte Gainsbourg character is reading Faulkner in this movie. I adapted Faulkner’s As I Lay Dying and then filmed Faulkner’s Sound and the Fury in Mississippi. So, we both really like the same writers, Patricia Highsmith and Cormac Mc Carthy, Walter Percy and Richard Brautigan. We have a very similar taste in literature and film, working together was made easy because we share these sensibilities. It seemed to me from day one that I got what he was going for because he doesn’t really adjust me much. I like all the ideas he comes up with and I guess he likes what I’m doing.

What was it like working with Charlotte Gainsbourg, Rachel McAdams and Marie-Josée Croze?

Tomas has three women he interacts with in the film, they’re all very different kinds of characters. Rachel McAdams plays Tomas’s first girlfriend with whom he’s not in love for whatever reason, so they have a rocky time together. Charlotte Gainsbourg plays the mother of the child who was killed, so Tomas’s relationship with her is very mysterious. Her reaction to what happened is also so unexpected and unusual, it could easily just be a dream. It’s really like two strangers crossing in the night, sharing these odd intense moments together, having their lives changed by those meetings, but then also parting and never seeing one another again. And then, Marie-Josée plays Ann, the assistant to Tomas’s book editor, who has a daughter. They fall in love, but Tomas brings a lot of the issues that he had in the old relationship to this new one. He is maybe a little cut off from her at times, he doesn’t share feelings, but, unlike the first relationship, he tries to work through it, so they end up a little happier than the first couple.

What was it like working with the child actors?

Lilah Fitzgerald, who plays my step-daughter as a young child, is a very funny, special girl. She is very precocious, but still a kid. On one level, they are like little adults, but they are also like little kids, so you can tease them pretty easily. Lilah has a good sense of humour and I think it really added to our relationship on the screen.

How does Tomas overcome his guilt?

One of the nice things about this film is that there is not one answer. There is no real scene where you can say “Oh, that was the key”, it’s a process. When it first happens, Tomas is extremely emotional and takes very extreme measures. Then, over time, you see that he’s maybe plastered over the wound, but underneath there is something still painful. And other things come along. Christopher grows up, finds Tomas and forces him to re-examine what he went through. There are patterns in his relationships that recur and he’s again forced to face certain things. There is also a meditation on different generations: Tomas watches his own very intelligent father fade and then makes a great bond with Ann’s daughter, Mina. All these different relationships and events contribute to his transformation. Is there something personal that you bring into the role of Tomas?

Tomas is a writer, I write. My dad was a mathematician and scientist, and Tomas’s dad is a physicist. There are a few moments when I can relate to my dad who was very cultured, but there were times when I felt like he didn’t understand what I was trying to do. And that’s what Tomas goes through with his father. But, you know, there are other things about Tomas: he does his hair in a way I would never do my hair and dresses in a way I’ll never dress. He cuts himself off from others and I really try not to do that.