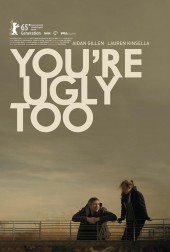 Mark Noonan’s debut You’re Ugly Too is a bittersweet drama reflecting on some dark subjects. It deals with them in a very subtle way, with a light touch of humour and not a little humanity.

The story is centred on Will (Aidan Gillen), who has been released from prison six months before the

end of his sentence to take care of his orphaned niece Stacey (Lauren Kinsella). He takes her to the Irish midlands to live in a caravan park, where the pair must learn to trust each other and form a family. Here, the two make an unlikely friend in the form of Belgian neighbour Emily (Erika Sainte), a woman trying to figure out her own relationship with her husband Tibor (George Pistereanu). Her character brings some warmth and thus both Stacey and Will are attracted to her, though in very different ways.

The film’s strength lies in its two main characters, as the dynamic of their relationship defines the story. Aidan Gillen (known to the wider public as Littlefinger in Game of Thrones) does a splendid job as a man with a criminal record, struggling to find a job in a place where employment is already hard to come by. One of the film’s main themes is trust: Will must gain the trust not only of outsiders, but of his niece as well. Lauren Kinsella gives a very good performance as Stacey, an 11-year-old girl who swears and spits in a fashion that manages to disturb even her fresh-out-of-prison uncle. In many ways, the roles between the two are reversed, but they are mostly there to mirror each other.

The film is shot simply, complementing its story. Noonan has done a sterling job in writing today’s Ireland; his familiarity with the surroundings is obvious as he touches on the darker subjects of human life without dramatising them. There is hope for the characters here, and a feeling that their relationship is going to persevere. As a result, You’re Ugly Too is a light watch that will more than likely leave you smiling.

You’re Ugly Too does not yet have a UK release date.

Watch the trailer for You’re Ugly Too here: