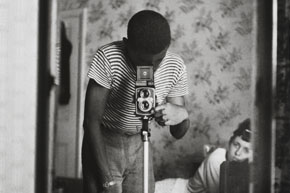 This spring, the Victoria and Albert Museum presents a display of over 50 recently acquired photographs exploring the experience of black people in Britain. The culmination of a seven-year project with the Black Cultural Archives, Staying Power aims to increase the exposure not only of photographs taken by black photographers, but also those with black British people as the subject matter. At the core of the exhibition is black British identity and its different representations; what is unique is that those themes are explored through questions of style, fashion, hairstyles, and domestic interiors.

Maxine Walker photographs herself with different hairstyles and make-up in order to address racial stereotypes, while the late JD ‘Okhai Ojeikere presents traditional and modern hairstyles worn by Nigerian women, portraying them as “sculptures for a day”. Then there are Neil Kenlock’s innovative portraits of Caribbean people at home in London: instead of going for traditional portraiture and photographing the person at a studio, using props, he takes the photographs at the individual’s own home, surrounded by their own possessions. As a result there is a certain sense of pride arising from the pictures.

One of the most interesting displays is Yinka Shonibare’s series, Diary of a Victorian Dandy (1998), which depicts the artist playing the role of a dandy in a great effort to poke fun at historical depictions of black people. His large-scale photographs are based on European paintings, which historically would not include a black subject.

It’s hard to imagine a place where exploring race and identity through fashion and style would fit more perfectly than at the V&A. While this is only a small exhibition, the photographs can be appreciated more when they are seen in the context of the V&A Photographs collection. Boasting more than 500,000, it is the first museum to collect and exhibit photographs as an art form. Visiting both will create a better idea of the space that Staying Power’s photographs occupy in the larger scale of things.

Staying Power is at the V&A until 24th May 2015, for further information visit here.