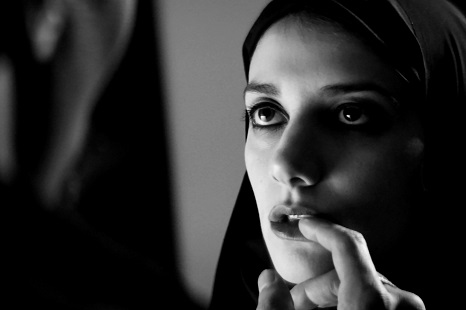 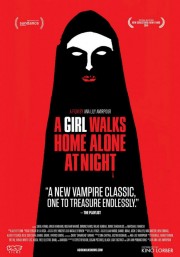 It’s difficult to avoid readings of gender in Ana Lily Amirpour’s A Girl Walks Home Alone at Night. The film bills itself as “the first Iranian vampire Western”, though perhaps “the first Iranian female vampire revenge quest” would be better suited. Nonetheless, this is shot with care and attention; the dialogue is sparse but well implemented, preferring to take a back seat to some masterful sound design and a deliberate construction of atmosphere. Where the film shines is its premise: Nosferatu, in the guise of a young Iranian girl, ladling out judgement and death upon Bad City’s corrupt and opportunistic menfolk.

The plot follows the story of Arash (Arash Marandi), an implausibly shy and decent, three-quarter-scale James Dean, eking out an uninspiring existence in Bad City while trying to support Hossein, his substance-abusing widowed father. Their plight is exacerbated by local drug lord and bona fide scum-of-the-earth Saeed, who seeks to exploit Hossein’s heroin addiction to keep the grieving family permanently indentured to him. Saeed’s exploits eventually attract the attention of Sheila Vand’s predatory succubus and their confrontation proves to have far-reaching consequences for both Arash and his father. Arash’s encounters with the vampire lead to an understated and sensitively handled romance, though this perhaps proves less interesting than trying to assess Vand’s silent and enigmatic character.

In a nutshell this is reflective of the film’s potential failing: it isn’t especially sure of what it wants to be. Followers of indie, adolescent love stories will be titillated by silent conversations between the two leads, fueled by a fashionable, often diegetic soundtrack. Horror fans will enjoy the film’s scenes of lovingly constructed dread (a moment involving a severed finger is a particular favourite), along with oppressive soundscapes that evoke the terror of a pair of footsteps following closely behind. It isn’t clear how satisfied either camp will be with the film as whole, but it remains that A Girl Walks Home Alone at Night takes a classic piece of traditionally Western mythology and reinterprets it to the point where an Iranian hijab could just as easily be a vampire’s shroud. The movie proves that innovating a cinematically cliched monster, one that has been iterated upon time and again, can still make great cinema when it is handled with intelligence and ambition.

A Girl Walks Home Alone At Night is released in selected cinemas on 22nd May 2015.

Watch the trailer for A Girl Home Alone At Night here: