The Mentalists at Wyndham’s Theatre 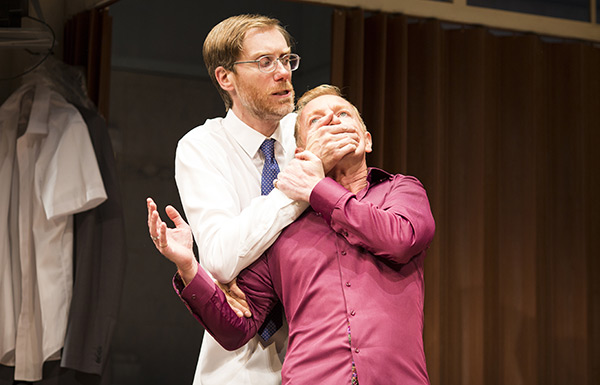 Ted is the nerdy manager of a cleaning company whose keen interest in politics and the social system at large has led to much discontent. When he comes across the novel Walden Two, by behavioural psychologist B F Skinner, he is convinced that its contents hold the key to creating the perfect society, and he takes it upon himself to put its theories into practice. His mission is to gather a thousand “well-behaved and clean” people to start an idyllic community based on good conduct and non-destructive living. He gets his friend Morrie, a hairdresser who is far more interested in making up outlandish stories than in Ted’s philosophising, to film a promotional video seeking recruits for the social experiment. Shut in a dreary Finsbury Park hotel room, they prepare for the shoot in what becomes an increasingly surreal atmosphere.

The two characters seem like a mismatched comic duo, but the very awkwardness of their exchanges is the spark that ignites the humour. Stephen Merchant gives his character, Ted, the right dose of nervous energy, coupled with a gradually intensifying streak of lunacy that makes him sinister and endearing all at once. Steffan Rhodri is consistently amusing in his portrayal of the seemingly superficial Morrie who becomes by degrees a meatier character as the plot thickens. The play premiered in 2002, but its themes are more relevant than ever, especially in relation to the collective anxiety in the face of what appears to be a deteriorating society. Playwright Richard Bean, known for the award-winning One Man, Two Guvnors, turns one character’s trauma and coping mechanisms into universal symptoms. Ted’s state mirrors a general desire to break free from a past that one does not identify with, and a common urge to begin afresh with a clean slate.

The most melancholy aspect of the play is the friendship between Ted and Morrie, who in spite of their many differences share a bond that seems to deepen as Ted’s situation worsens and Morrie’s nonchalance turns into genuine care. From a wider perspective, the most disconcerting notion raised by the play is that there is a fine line between insanity and thinking outside the box. The grey area between idealism and fanaticism holds a million possibilities and Ted stands somewhere in the middle of that dangerous ground, receiving an equal mix of sympathy and pity from the audience. The Mentalists is pleasantly lighthearted throughout but there is more than comedy on offer: its deeper layers can set into motion stimulating reflections about the current state of society and the role of the individual in the bigger picture.

The Mentalists is on at Wyndham’s Theatre from 13th July until 29th August 2015, for further information or to book visit here.