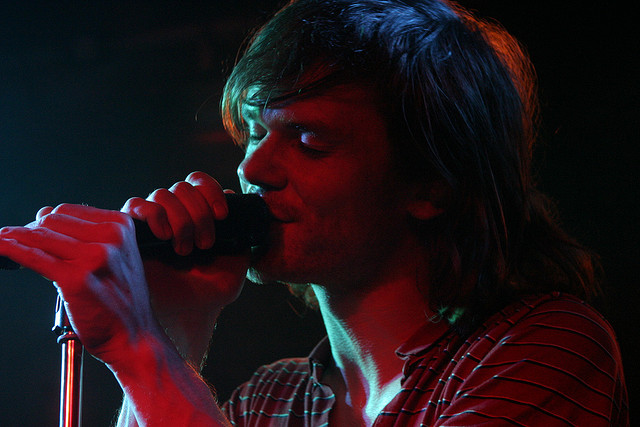 Idlewild played an early Friday night set at Koko, Camden – a stunning venue where they have had previous experience. The gig was divided into two sets: a stripped-back folk-style acoustic set, followed swiftly by a pumping electric set. Opening without a support act allowed the band to show off multiple aspects of their talent, as well giving a set list that was almost 30 songs long and covered a lot of ground.

The first hour was a mellow and engaging, and pulled the audience in, incorporating a violin and an accordion to accentuate the more raw and whimsical aspects of some of their earlier tracks. It also gave Roddy Woombles’ vocals a chance to shine in their purest form. In Remote Part/ Scottish Fiction was particularly popular, ending with the eerie recitation of Edwin Morgan’s poem that momentarily left everyone in a sombre state.

This was followed by a rousing, amped-up set that leapt into action with Collect Yourself from their latest album. El Capitain was a crowd-pleaser, with everyone going wild at the call to “stand up, stand up”! The final track was You Held the World in Your Arms, which proved a strong closing number. It somehow reflected all that had just passed; it acts as a bridge between their older sound and their newer work and feels distinctly mature, yet maintains some of the hopefulness underlying their more youthful songs.

The band are clearly seasoned performers, juggling instruments and each taking a moment to shine. The three original members in particular felt like a solid unit, rather than supporters of a frontman, and this translated into the music. The musical contribution of each band member was essential, with keyboards and a fiddle used to add to their unusual interpretation of rock, which doesn’t quite slot in to any indie boxes.

In some ways Idlewild represent a very specific time in music, specifically the mid to late 90s.  The indie scene was infiltrating the mainstream and so had a poppier vibe, but was acting as a lyrically poetic voice for disillusioned youth. While the progression of their sound was evident in this mixed bag of songs, it was clear they stay true to this ethos even in their modern work.

For further information about Idlewild and future events visit here.

Listen to Collect Yourself here: