Caravan Palace at The Forum 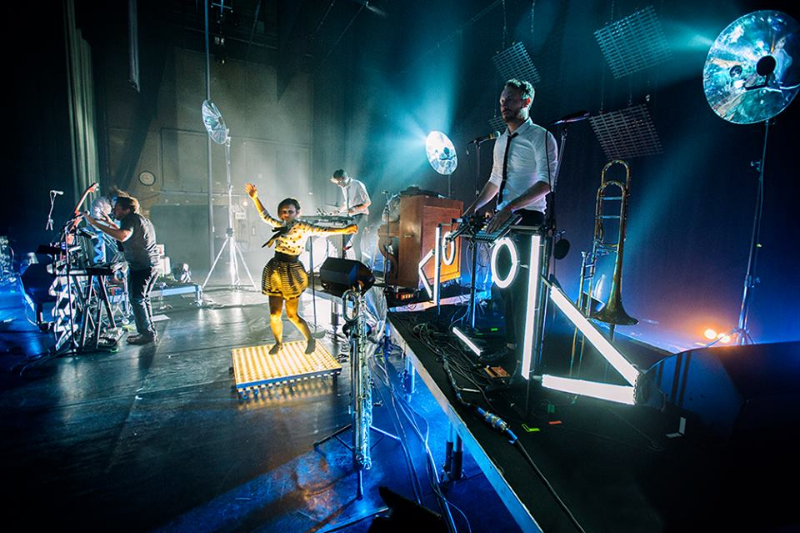 Caravan Place at The Forum

Lone Digger, Suzy, Rock It for Me, Jolie Coquine

Electro-swing is a bit like Marmite: you either love it or hate it. Luckily, there was only room for the electro-swing enthusiasts at The Forum in Kentish Town as Parisian ensemble Caravan Palace put on a vibrant night of energetic music. After the successful release of their third album <I°_°I> (a.k.a. Robot) in October, the seven-piece delighted an eager crowd with numerous tracks from their new album and back catalogue.

From the outset, Caravan Palace boasted their quirky and zestful attitude with Comics from the new record. This particular track leaned more towards the synth-heavy, as laser-coloured synth riffs and harmonies swirled around the hall. While the solid rhythmic kick from the drums and dramatic breakdowns further amplified the electro-pop vibe, it was not the most ear-catching opener.

After a lukewarm introduction, the band turned up the retro-futuristic gear with Lone Digger and Suzy. Both tracks made the most of both musical territories, with rich jazz figurations and sultry swing rhythms from the wonderful array of instruments (from the fiddle, vibraphone, woodwind and brass) making their mark alongside a foot-tapping electronic drumbeat. The dexterous scatting in Suzy also raised the roof, received with a great euphoric roar from the crowd.

The evening provided a visual spectacle as well, a particular highlight being Rock It for Me. The retro-laden backdrop accompanied a swing dance interlude and encouraged the lively crowd to get on their feet and feel the swinging sensation with the band. Influences of Django Reinhardt were clearly accentuated in old favourite Jolie Coquine, as the Parisian entourage kept the voltage going from the stage with some unashamedly kitsch swing details and a driving electro-funk propulsion. At the same time, vocalist Zoé Colotis conducted a “jumping contest” to boost the energy of the crowd. By contrast, an ethereal, neon ocean-coloured gaze cast through Midnight and Aftermath, where both tracks were attuned to slow-brewing hip-hop and dub ambiences.

Caravan Palace promised an extravaganza of dazzling electro swing, and they delivered on every angle. While the genre’s existence is hard to explain and is still met with scepticism, the highly infectious music of the French seven-piece band undeniably exudes a positive energy.

Watch the video for Suzy here:

Caravan Place at The Forum

Lone Digger, Suzy, Rock It for Me, Jolie Coquine