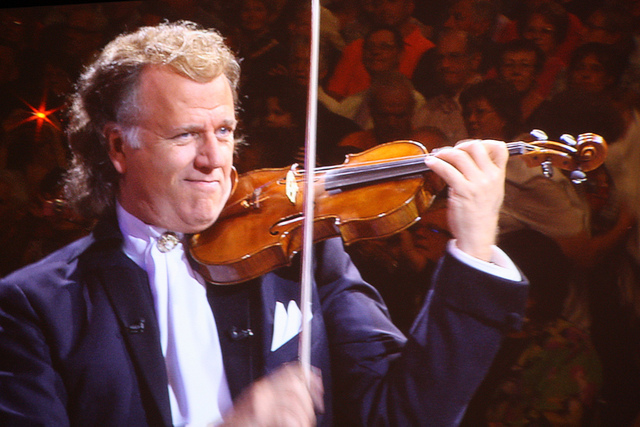 Dutch violinist and conductor André Rieu has an irresistible charm and a real knack for making classical music concerts both musically compelling and rich in entertainment. Alongside the magnificent Johann Strauss Orchestra, “King of Waltz” Rieu conducted an evening of some of the world’s best-loved pieces of classical music, light waltzes and popular tunes to a packed Wembley Arena.

Unlike most regular classical music concerts, the atmosphere was liberal right from the outset, with audience participation encouraged to the maximum. To the pompous sounds of 76 Trombones, Rieu and the orchestra marched their way through the enthusiastic crowd towards the stage, in the process orchestrating some synchronised clapping and sing-alongs. The large orchestral entourage were fitted in glamorous dresses and smart tuxedos, as if the Last Night of the Proms were garnished with a heavier dose of unapologetic kitsch.

One could feel a strong camaraderie between the orchestra, Rieu and the audience; the night was full of spark, with music from across the spectrum – lyrical Italian operatic arias by Puccini (featuring The Platin Tenors and Carmen Monarcha) to a stunning emotional number from Andrew Lloyd-Webber’s musical Phantom of the Opera, and some rhythmically infectious Strauss waltzes including the ever-popular Blue Danube. Of course, it would not have been a Christmas show without the occasional festive classics like The Holy City. However, the highlights of the night were the two very different takes on Hallelujah (Handel’s Hallelujah Chorus and the Leonard Cohen hit) and Rieu’s sublime performance of Amazing Grace on his legendary Stradivarius violin alongside the colourful sounds of the bagpipe.

On reflection, André Rieu and the Johann Strauss Orchestra brought joy and happiness to the Christmas week with an entertaining night of wonderful music and spectacle in various forms. With a blend of classical elegance and humorous personality, Rieu has made the perfect cultural package to delight audiences across the globe.