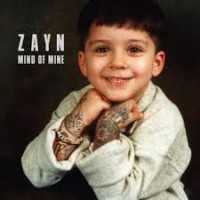 Once the fifth One Direction boy, now a solo standing artist, Zayn Malik releases his debut solo album Mind of Mine. Straight to number one on Billboard 200 Albums Chart, this album hits a high note.

Channelling the ambient, hypnotic sounds of The Weeknd paired with the hazy grit of Frank Ocean, Mind of Mine shows a mature Malik stapling his solo career away from the famous boy band and cementing his individuality. With a pleasantly unhealthy mix of dark, distorted self-loathing and self-adoration, Malik is in the running to become the UK’s answer to Justin Bieber.

Taking a leap and working with producer Malay (Frank Ocean, Alicia Keys, Andre 300), Malik moves away from the pop scene and enters the darker circles of contemporary R’n’B culture. Opening with a floating introduction, Mind of Mine (intro) is just under a minute of blissful, romantic desperation, setting up for the number one hit, Pillowtalk.

Standout track Intermission Flower offers an insight into Malik’s Islamic Pakistani heritage, the lyrics sung in Urdu in a traditional prayer call style, combined with an Irish acoustic sound. With an absolutely gorgeous message, the viewer finds serenity midway through the album.

It is in ninth track Wrong that the power of Malay as producer is really evident, alongside contrasting vocals by Kehlani. A “going places” song, comparable to Drake, The Weeknd and Rihanna, it definitely has the potential to be a summer classic, with forlorn echoes and a heavy baseline.

Mind of Mine comes to us from a poetic, musical and clearly heartbroken new solo artist. We wonder why he waited so long!

Mind of Mine is released on 25th March 2016, for further information or to order the album visit here.

Watch the video for Pillowtalk here: