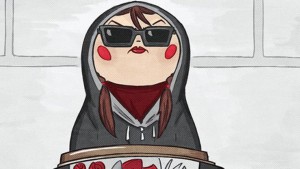 Far from the glittering lights and dazzling success of London’s West End, the King’s Head theatre in Islington currently plays host to the mesmerising and award-winning Russian Dolls by Kate Lock.

Set in modern-day Britain, the play explores the relationship between the young and the old, as Camelia, portrayed by the outstanding Mollie Lambert, finds her world becoming desperately intertwined with Hilda, brought to life with touching elegance by Stephanie Fayerman. Camelia has recently been released from a young offenders’ institution and is looking for some cold, hard cash; Hilda is a recently blind former care worker, and through either luck or misfortune (depending on your point of view) they begin to develop a friendship.

The play is split between monologue and conversation from Camelia and Hilda. The idea of constant monologue may bring out cold shivers to the majority of theatre goers, but it’s undoubtedly necessary here. Camelia and Hilda both have stories to be told and, by getting to know each character individually, the relationship between them that at first seems unfeasible becomes obvious and important. That’s the underlying message of Russian Dolls: that even in the “Broken Britain” mentioned on the programme, people have more in common than they think.

It’s worth mentioning at this point just how brilliant both leads are. It must be daunting being the sole inheritors of an entire stage for 90 minutes, but they do it superbly. Special praise must also be given to the writer Kate Lock, because perhaps the play’s defining feature is the script. Despite the performances of Fayerman and Lambert, the real star of the show is the play itself. Hinting at violence, but never showing it, is a simple but understated touch; the themes explored within Russian Dolls are inherently violent, but the emphasis of the play is on relationships within this violent world, and not the violence itself.

Sadly Russian Dolls portrays a reality that many of us are all too familiar with, yet the majority of the audience didn’t leave wringing their hands in desperation, but with optimism. Despite the cracks in society that the play shows us, the ability of two wholly different personalities being able to coexist is uplifting, and the story is mostly a happy one. On top of stand-out performances from all involved, Kate Lock and Russian Dolls may be destined for even bigger and better things.

Russian Dolls is on at the Kings Head Theatre 5th until 23rd of April, for further information or to book visit here.