This Is Living: An interview with Liam Borrett 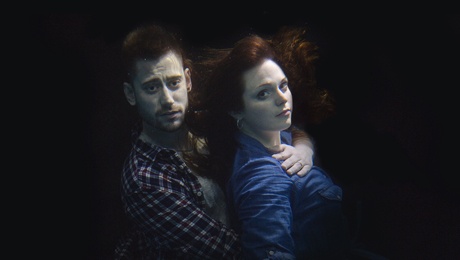 This Is Living: An interview with Liam Borrett

Originally from Norwich, Liam Borrett moved to London to train on the BA Directing course at Drama Centre, London. Shortly after graduating he took This Is Living, his debut play as writer and director, to the 2014 Edinburgh Fringe Festival. His second play, Dancing, a one-woman monologue about early-onset Alzheimer’s, premiered at the Etcetera Theatre in early 2015. Liam also directed his own work Hannah in 2014 for the Arcola’s Miniaturists evening, and more recently Declan Feenan’s Boileroom.  We chatted to him ahead of the upcoming London premiere of This Is Living at Trafalgar Studios this May.

What gave you the inspiration for This Is Living? Was it a personal experience, an issue, a character?

​I had always had in my head an image of an old man, at the end of his life, sitting in his bedroom in the dark. At the far end of the room, the door opens, and in the frame stands a young woman. She smiles at him, he smiles back. Then she asks him: “Are you ready?” He smiles again, nods, so she helps him up, takes him by the hand and they leave. I didn’t really know what that was, or what that would be, but it seemed an interesting starting point.

What are your thoughts on the casting of Michael Socha and Tamla Kari? What do you think they bring to their roles?

​Casting actors for these characters was always difficult and in many ways I was looking to cast two people who were, in many respects, a lot like the characters. Michael sets you at ease the moment you meet him: warm, self-deprecating and effortlessly down-to-earth. There’s also something really interesting about Michael being a parent; he’s the first actor we’ve ever had that has a child. And then Tamla is unknowingly funny, fiercely intelligent and extremely likeable, which is absolutely needed with this play. The subject matter is brutal: you’re experiencing different levels of grief for a period of two hours, you need two people that you’re willing to go on this journey with, to sympathise with, otherwise the whole thing doesn’t work. What Michael and Tamla provide is an accessible window into the lives of these characters.​

​How important do you feel the play’s fractured structure is to the work as a whole, and how will it affect the audience?

I think it’s the reason the play works in many ways. You’ve got three strands of this story playing all at the same time. The current situation: Alice has died, and each night when he falls asleep, her husband Michael finds himself able to hold contact with her. You’ve got Michael, alone with their daughter in the house, trying to deal with his new set of circumstances as a new parent, and then you’ve got the past, from the moment they meet, up until pregnancy. All of those moments of their life together that we show, are finely balanced against one another, juxtaposing joy with grief, an argument in the past with an argument in the present. The moments that have been chosen, are offered in such a way that an audience cannot help but wonder: well what would I do in that situation?

​This Is Living has been celebrated for being as uplifting as it is sombre. How did you go about creating that balance?

It had always been the intention to show the two extremes of this relationship. So it was finding a way in which it would be appropriate to explore those happier moments without it jarring with the main tone of the piece. I think the way that it is managed, and why it works well, is that those moments are never in any way sugar-coated. They are real moments for these people, not out of a romcom or a fairy story. You want them to succeed and by seeing those happier moments, as an audience member, you hold onto the thought that whatever horrific situation they find themselves in now, they have been, at numerous points in their relationship, incredibly content. ​

Is there anyone who has been a particular inspiration to you, either while creating the play or in general?

I have been incredibly lucky to have a strong supportive group of people around me; my parents especially, my teachers, both in my hometown of Norwich and in London at Drama Centre where I trained, and a close set of friends, who have allowed me to set aside any doubts and push forward to try and achieve a goal. Peter Wilson and the team at PW Productions have been invaluable in believing in me and the play, which is why it is back now. Alice and Michael are inspired by a lot of people. I think that’s what makes the two characters breathe. They’re not fully fictional, there’s a truth behind them. ​

​Do you think the play will be received differently in London?

​The play has changed an incredible amount since its Edinburgh run two years ago. It’s a completely new script, production, creative team and cast. As much as I enjoyed what was created for Edinburgh, I felt that there was something deeper that needed to be done with the piece. Now I have been fortunate enough to have had the chance to let the two characters breathe and properly meet and grow with each other in a way that does not feel rushed. The heart of the play is the same, the problem they are facing is the same, it’s just looked at in a different way. I think audiences will always connect with this problem – it’s universal – and I hope that they will engage with the piece in the positive way that they did in Edinburgh.   ​

The themes of loss, grief and saying goodbye resonate with everyone differently. How did you go about handling such vast, complex subjects?

​For me, it’s been about making the subjects personal to the characters. No one knows what it is like to say goodbye to someone who has died, not physically at least. No one has had the opportunity to stand opposite a deceased person and have that moment, so you have to relate that to something that is possible. I always see breaking up Alice from Michael and Lily, their daughter, as no different from moving Alice to the other side of the world without communication. The idea, for her, that the life she built with them is continuing without her that idea you can start to understand, and go from there. It’s about making the thing personal, and therefore relatable, which is why I think it resonates with an audience.​

Is there any one idea or feeling you hope the audience will take away from the experience?

​To cherish the time they have with other people. If they’re lucky to be with someone they love, whether it be a family member or a friend. You won’t have those people forever. Enjoy them while you do. ​

You’ve done both writing and directing, but do you prefer one or the other? Are you looking to move into any other creative areas in the future, such as TV or film?​

I enjoy both for different reasons. I enjoy the writing as it allows me a freedom as there are, in theory, no limitations. It falls from your head/heart, out through your fingers onto a Word document. The directing I love because you get to shape that story. I find that important with work that I’ve written in particular, because you really want an audience to receive what you originally intended. As for the future, it would be nice to move into other mediums. This is Living, I feel, would be particularly suited for TV, but I think I’m always going to keep coming back to the stage. That immediate reaction from an audience and the thrill of the sheer live nature of the thing is unbeatable. ​

And finally, is there any advice you would give to an aspiring writer or director?

I think the only bit of advice I would give is to actually go out and make something, whether that be writing or directing. It is so easy to sit with an idea and not do anything about it. Ideas don’t cost anything. You must get your work seen, you can’t wait around for someone to notice you. Otherwise it’s only ever going to stay in your head and you’ll always be waiting around for something to happen. Luck is only a bit of the solution, put the hard work in and you’ll be surprised at what might come along.

This is Living is on at Trafalgar Studios from 17th May until 11th June 2016. Book your tickets here.

Check back soon for our review of This Is Living.

Is Tropical: A chat about Black Anything and having Kirstie Fleck on board
M83 – Junk | Album review