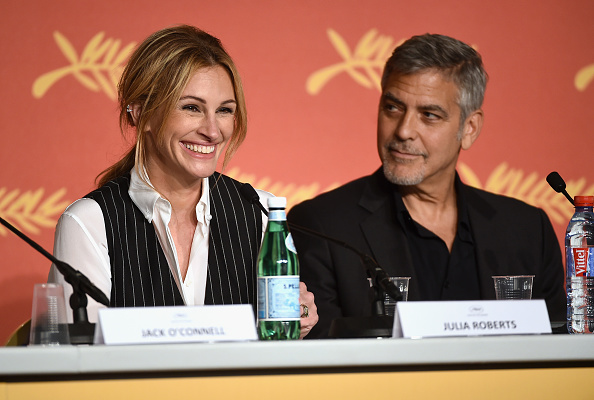 George Clooney has railed against the modern news media during a press conference in Cannes while promoting his new film Money Monster, directed by Jodie Foster. He argued that the rise of Donald Trump was “a result of news programmes not asking follow-up questions,” and that there has been an “evolution of the cross between news and entertainment.” Clooney went on to say that the filmmakers had screened the 70s classic news satire Network to a set of children, who in turn could not see the comedic value in the film because so much of what it had predicted has since come true.

In Money Monster, Clooney plays Lee Gates, a TV “money expert” and main purveyor of the hyper-charged, news-as-entertainment culture found in elements of the US media. When the Money Monster show of the title is hijacked by an irate, down-on-his-luck young truck driver, Kyle, played by Jack O’Connell, Gates has to evaluate his place in the financial process that is rigged from the start. Clooney stressed some difference between his lifestyle and that of his character, stating: “I hope that I am little more evolved.” But he conceded the familiar feeling of being brought low on occasion: “You think you are the smartest person in the room until you’re the stupidest person in the room.”

Jodie Foster, who first appeared at Cannes as a 12-year-old in Palme d’Or winner Taxi Driver, was delighted to be back at the festival with a film she described as having “a lot of ideas, a lot of layers.” Foster explained that her first experience of Cannes was “more chaotic,” but described her return as a director: “It is the greatest honour because it’s really a place for author filmmakers like Almodovar and Jarmusch.” Clooney and co-star Julia Roberts heaped praise on Foster’s skills as a director. Clooney said that “Jodie works well with actors, having been one,” and Roberts described their collaboration as a “meeting of minds.” Foster returned the compliment to Clooney, recognising his history as a successful director: “It’s easier to have a dialogue with someone who has been in the fire.”

Foster’s film is an indictment of unfettered capitalism and business greed. Dominic West, who plays Walt Camby, the crooked CEO of a finance company, relished that the film was about “literally holding a banker to account.” O’Connell was similarly enthused about channelling the fury of working class agitation against a seemingly corrupt and self serving financial system. He described his experiences as a young actor in This Is England, where Stephen Graham, who played Combo in the film, taught him how to play a “furious role.” O’Connell joked: “I learn from job to job and steal other actors’ techniques.”

Foster stated that her ultimate aim for the film was to highlight “our complicity and responsibility building a system that is unfair.” Such a system, though male dominated, often has a negative effect on men. In the film, both Kyle and Gates are conflicted and, as Foster argued, “struggling with their sense of failure who look to strong women who they have disappointed.” Arthur Miller would be proud.