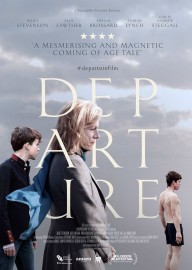 In his debut film, director Andrew Steggall shows considerable promise. The first act is masterfully crafted: we first meet the characters at night, winding with them through the wooded country roads of France; it has all the intrigue and atmospheric polish of a Scandinavian drama. Unfortunately, the nuanced and sensitive palette with which Steggall initially paints is soon clouded by affectation.

Set in a picturesque French village, Departure follows the discordant lives of Beatrice (Juliet Stevenson) and her 15-year-old son, Elliot (Alex Lawther). The central themes – unrequited love, sexual frustration, family breakdown and loneliness – are not explored in a particularly original or enlightening way. Whilst the cinematography is stunning throughout, it occasionally feels as though the life has been sucked out of the film. There are too many shots of Bea or Elliot lying dejectedly on their respective beds, huddled in balls and lamenting their sorrows. Elliot plays up to the stereotype of dejected poet, attempting to follow in the footsteps of his heroes Proust and Victor Hugo. It’s amusing at first, but is over-exploited: it becomes uncertain whether his character is actually an unintentional cliché or his histrionic episodes and self-absorbed outlook on life are intended to be taken seriously.

Its exploration of the importance of speech in conveying emotions is interesting. The visual richness often supplants the need for dialogue and the mistranslations between Clement (Phenix Brossard) and Elliot poignantly recreate the awkwardness of adolescence and not knowing how to say what you feel. Again this subtlety is undermined by the script’s occasional need to spell out exactly what the characters are thinking. Bea exclaims “I just don’t know what I am doing”, which occasionally is true of the film as a whole.

Stevenson’s performance is meticulous, conveying both the self-absorption and listlessness of her dejected character, who in the processes of neglecting herself forgets about her son. Lawther’s performance is also impressive; he draws out the pretentiousness of the character, making him, at times, insufferable. If anything it should be watched because it gives an artist’s impression of a dysfunctional family – a watercolour painting brought to life. It’s a layered piece: its outer-aesthetic is carefully tended but more work is needed on the inner layers.

Departure is released nationwide on 20th May 2016.

Watch the trailer for Departure here:

Diao Chan: The Rise of the Courtesan at the Arts Theatre | Theatre review
A Hologram for the King | Movie review