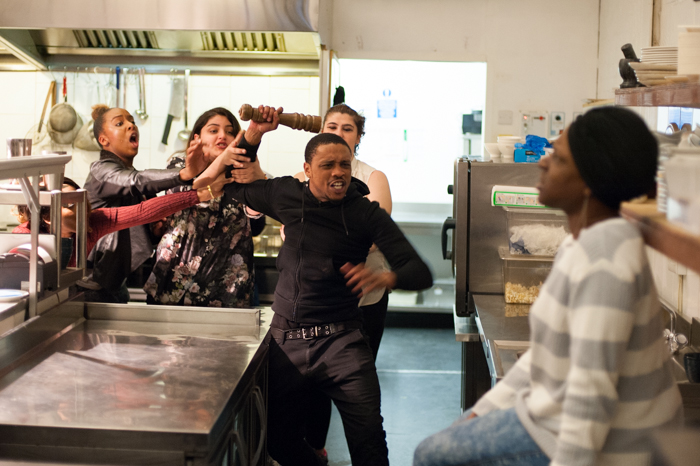 The Big House theatre company works with former offenders, youngsters who have previously been in care, and those who are vulnerable and who may fall into a life of crime. Knife Edge is the latest of a series of productions performed by these young people and inspired by their stories. From beginning to end, the project fully embraces the true spirit of what a community should aspire to achieve. Not only does it offer long-term support, but it provides a space in which these talented people can grow, gain confidence and expend their time and energies in the creative realm. Most importantly, the project allows true integration.

Performed inside London’s first authentic Hawaiian restaurant, POND Dalston, Knife Edge is an immersive theatre experience exposing the difficulties that await those in foster care when they first step out into the “real” world on their own. Lacking support and guidance, they seem condemned to live on the edge of crime. The protagonist is a girl with no name whose insensitive boyfriend and absent father let her down time after time, but they are the only connections she has. Although she does not set out with bad intentions, her life spirals into a vortex of increasingly dramatic and serious incidents.

Beyond the social value of the company’s work, Knife Edge is an excellent piece in its own right, performed superbly. The majority of the cast do not have previous acting experience, and yet they create perfectly believable characters and burst with passion as they deliver their lines. The story is told by two narrators who occasionally interact with the characters in humorous exchanges discussing the course of the story. Comedy is central to the play and, although every dialogue highlights grave issues, it also keeps the laughter going.

The venue is spacious and allows for innovative set-ups for each scene. The audience (literally) follows the action between the main space, which includes a bar and the restaurant kitchen, and a second bare room. The ticket includes a post-show meal that allows the audience, actors and production team to intermingle and exchange thoughts: a nice touch, in line with the spirit of the project.

The play transmits a sense of the fatality and apparent inevitability of a free-fall looming beyond the care system. Risky circumstances escalate rapidly into crime, and law-breaking is always seen as a viable option. In Knife Edge, storytelling blurs into the real world and it’s difficult to distinguish between actors, survivors, spectators or mentors. If the scope of theatre is to remove barriers as it inspires and entertains, then this is theatre at its most effective.

Knife Edge is on at POND Dalston from 18th May until 12th June 2016, for further information or to book visit here.