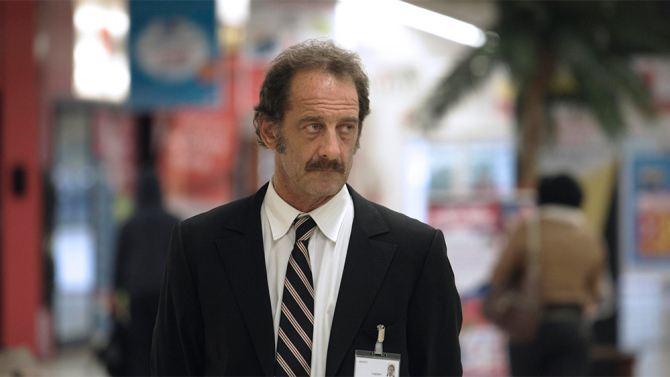 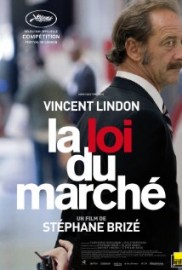 How far will a man go to make ends meet? How can we measure men against each other when they are forced to suffer injustice and hardship in an unfair economy? This film depicts with a detailed and nuanced lens the tragedies of the everymen who are forced to find answers to these questions. It follows protagonist Thierry, a fifty-something mechanic on the dole, struggling to find work and support his wife and disabled son. He is a man failed by the system and his incompetent job agency, abandoned by businessmen who cut him from his previous job, even left disappointed in the education system that seeks to undermine the dreams of his son.

Director Stéphane Brizé proves his skill as a modern and candid storyteller, his camera focusing on ordinary hardships. The movie is shot mostly in long, unbroken takes, often jerkily following Thierry through grey corridors, artificially lit offices, bright white supermarkets. A five-minute Skype interview between Thierry and a prospective boss is filmed without cuts, which perfectly recreates the tension and the false sense of hope that is shattered. The whole time the viewer can hear only the harsh and unreasoning voice of the interviewer. When Thierry receives a job as a security guard at a supermarket, the film is tinged with a darker streak, as he is forced to spy on his co-workers – aiding the managers who fired him in his previous job. Long, winding shots of inserted CCTV footage are utterly engaging, forcing the audience to conspire with the innate voyeurism of Thierry’s new role.

Vincent Lindon is impressive as Thierry: at no point does it feel as though he is acting, so effortlessly does he blend in with the cast of non-professional performers who play dramatised versions of themselves. His face is a landscape of pain, with his thick-set brows and deep wrinkles. His honest and unflinching portrayal of the everyman, down on his luck yet capable of keeping his family happy, makes it impossible to not warm to his character.

Invariably this is not easy watching, but equally it is not tedious. It is political, contrasting the hypocrisies of societal systems: one minute, managers of the store offer a retirement song to a colleague, the next they force staff to resign. La Loi du Marché stings, but should be seen.

La Loi du Marché (The Measure of a Man) is released in selected cinemas on 3rd June 2016.

Watch the trailer for The Measure of a Man here