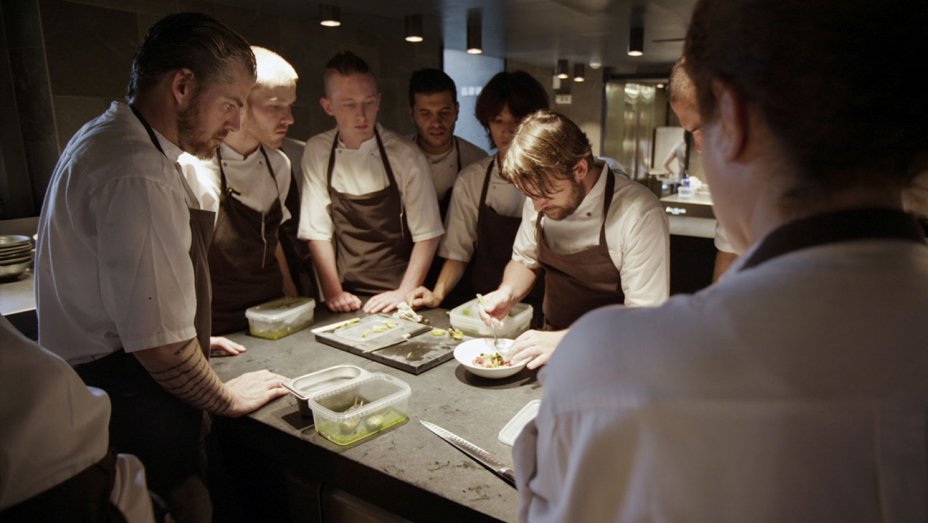 As all eyes are on New York, where tonight the 50 Best Restaurants awards ceremony will be captivating the attention of gastronomical institutions and amateur foodies alike, Studio Canal distributes the documentary Noma: My Perfect Storm, a tribute to the culinary sensation René Redzepi and his Copenhagen restaurant Noma. Pierre Deschamps films the ups and downs of what has become one of the world’s most talked-about culinary establishments since its opening in 2003, providing unprecedented insight into the victories and scandals of Redzepi’s kitchen and endorsing the sui generis concept the restaurant cultivates.

A pioneer of a new Nordic cuisine based on the exclusive use of local ingredients, Noma went from being the butt of worldwide skepticism, not to say derision, to being the centre of hype in 2010, when it was crowned the World’s Best Restaurant. As its chef rode the wave of critical infatuation, the legitimacy of Nordic gastronomy was confirmed by the restaurant’s firm hold on the top position for three consecutive years. Then 2013 set off a catastrophic series of events and a sudden change of wind, but the initial disappointment was met with renewed strength and willpower and the 2014 awards showed how staying true to one’s convictions pays.

In the same way as his staff describe him as being the “pulse and beat” of Noma, René Redzepi is at the heart of this documentary, his role shifting from interviewed character to self-declared narrator, sometimes even overlapping with the camera in some extreme POV sequences. Voiceover by the top chef himself invests the whole film with an often very poetic tenor, that, paired with a dramatic soundtrack and frequent use of effects, infuses a slightly overplayed heroism. Redzepi’s distinctive “Scandi-irony” and irreverent swearing give it a sharp-tongued edge, while the narration reveals how closely knit the Macedonia-born chef’s personal story and Noma’s evolution are.

Punctuated also by the commentary of those who saw Noma grow into the gastronomical authority it has become, the documentary features many reputable voices (from world-class chefs to journalists), as well as the more humble perspective of farmers and foragers who witnessed the culinary institution’s evolution. Gripping and heartwarming, the story of René Redzepi and the world’s most unconventional restaurant seems to be a true case of reality making a wonderful screenplay.

Noma: My Perfect Storm’s UK release could not be more perfectly timed. As New York prepares an action-packed night of awards, we wish the best of luck to the culinary geniuses rivals had once dismissed as the “seal-f*ckers”.

Noma: My Perfect Storm is released in selected cinemas on 10th June 2016.

Watch the trailer for Noma: My Perfect Storm here: