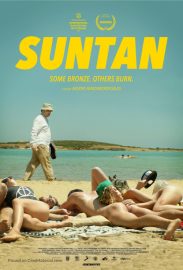 Argyris Papadimitropoulos’s new film, an accomplished psychological drama, begins as a dark comedy, but ends almost in tragedy. Introverted doctor Kostis Makridis (Efthymis Papadimitriou) arrives on the Greek tourist island of Antiparos as the new local GP. The sleepy, picturesque town offers little in the way of excitement, apart from a steady stream of elderly patients. It’s one of those places where everyone knows everyone. The lecherous middle-aged local men long for the summer, which they assure Kostis will bring streams of attractive, intoxicated young women for them to prey on.

When the promised time finally arrives, Kostis encounters the free-spirited Anna (Elli Tringou) and her wild friends at his surgery, and again later at the nudist beach. They invite him along on their adventures as a sort of novelty, and affectionately nickname him “dad”. Despite this, the fun 20-somethings manage to bring Kostis out of his shell, even as he simultaneously begins to neglect his patients in favour of drinking and partying. As is common with these types of stories, things eventually turn sour. In this case, it is when Kostis begins to mistake Anna’s playful flirtation for something more, and develops an obsession with her.

The narrative is told exclusively from the protagonist’s point of view, positioning him as the awkward, ageing outsider to the hedonism of the students. Papadimitriou and the director do an adequate job of portraying Kostis’s rapidly deteriorating state of mind. It’s a brief character study of a less than savoury personality, and doesn’t leave much of an impact apart from ending on a strange and harrowing cliffhanger. What is to be commended is Papadimitropoulos’s unflinching gaze when it comes to portraying the uncomfortable truths of the story, whether it’s Kostis’s pale, doughy body next to his lithe, tanned friends, or his complete lack of self-awareness when in the grips of desire. Capturing the aesthetic of youth as uniquely as Harmony Korine with Spring Breakers, Suntan is neither a cautionary tale nor a sordid taboo romance, but will undoubtedly inspire debate from all who see it.

Watch the trailer for Suntan here: