Adventures in Wonderland at the Vaults

Adventures in Wonderland at the Vaults | Theatre review 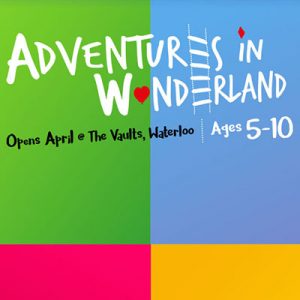 Adventures in Wonderland invites children down the rabbit hole to experience Lewis Carroll’s topsy turvy world. In this grand-scale, fully immersive show, set in the labyrinthine Vaults under Waterloo, little ones are encouraged to touch and explore the set and to interact with the zany characters.

Alice’s Adventures Underground is the original, grown-up show (also running currently) of which Adventures in Wonderland is a simplified and shorter version. It uses the same set and many of the same characters, but the dark edges have been shaved off and replaced by a bright and bold CBeebies-presenter kind of energy.

The highlights include a gloriously flamboyant Queen of Hearts who flirts with the dads in the audience while trying to find her way out of a room surrounded by identical doors; a puppet Humpty Dumpty who asks for nonsense words from the kids and explains what they mean; hide-and-seek played with holograms in mirrors and a tea party hosted by a Tim Curry-esque Mad Hatter. Innovative staging ensures a surprise around every corner and each new inhabitant of Wonderland delights in riddles and wordplay.

It’s a complete world that begins before the show starts, in the bar area, where a wooden forest and candlelight set the mood, and flamingo croquet is available to play.

Plenty of participation is possible, but those children less inclined to get involved aren’t pushed out of their comfort zone; they can simply stand (or sit) and watch.

The show is advertised as suitable for kids aged five to ten. While it may be a wondrous experience for the very young ones, it might not offer quite enough stimulation for the nine and ten year olds. With not much story to speak of, the main draw here is the wonderful set with its tunnels made of book pages, its mesmerising projections and so many other clever little details.

And importantly, the show serves as a shining example for its young audience of the potential of non-traditional theatre.

Adventures in Wonderland is at the Vaults  from 13th May until 3rd September 2017, for further information or to book visit here.

Watch the trailer for Adventures in Wonderland here: