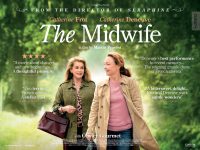 Take note. For anyone wanting to make a film centring around the emotional, moving struggles of midlife crises of the modern age, find Catherine Frot and Catherine Deneuve. The pair take the leading roles in Martin Provost’s latest work, The Midwife, a thoughtful depiction of the burdens borne by individuals in the 21st century. When two polar opposite forces combine with such a piece, fingers are crossed and prayers are held in the hopes of fireworks. For The Midwife, the spark is lit, but is there a bang?

The movie is set in the suburbs of Paris. Single mother Claire, played by Catherine Frot, is our title character. Although a talented and experienced midwife, she has begun to question her abilities in the profession. The stress of both her work and social life are beginning to stack up. Working nights and sleeping throughout the day has led Claire to live a lonely existence now her son has left for medical school. Out of the blue, she receives a phone call after work from Beatrice (Catherine Deneuve), the extravagant mistress of her deceased father. Beatrice wishes to reunite with Claire after 30 years. The pair are different in almost every respect yet, despite their variations, the reserved, meticulous Claire and the free-spirited, flamboyant Beatrice offer each other valuable lessons in liberation and sincerity that they have forgotten in their lives.

The film dwells in a severely dark state of realism, symbolising the realm in which Claire finds herself throughout. This lens works to an extent, but scenes do begin to drag when dialogue is less frequent and the grey walls of the Parisian suburbs surround the cast. Scenes brighten when Frot and Deneuve are working their magic, not because of a change in environment or colour palette, but because of the strength of their performances. The two actresses make terrific foils and an even better on-screen duo. As the picture progresses, we see the relationship between the women blossom, fuelled with themes of resentment, forgiveness, anger, relief and joy. The ability to encapsulate all of these emotions within a two-hour drama, centred around family and individuality, deserves far more credit than it will receive.

The plot is slightly dull, leaving very little to the imagination, and the actresses outshine the film itself. The significant lack of narrative means that The Midwife lacks the engaging features that will take it to the next level, but this is rescued by the two Catherine’s, and thanks to the large amount of screen time they have, this picture is certainly worth a watch for their liberating performances alone.

The Midwife is released nationwide on 7th July 2017.

Watch the trailer for The Midwife here: