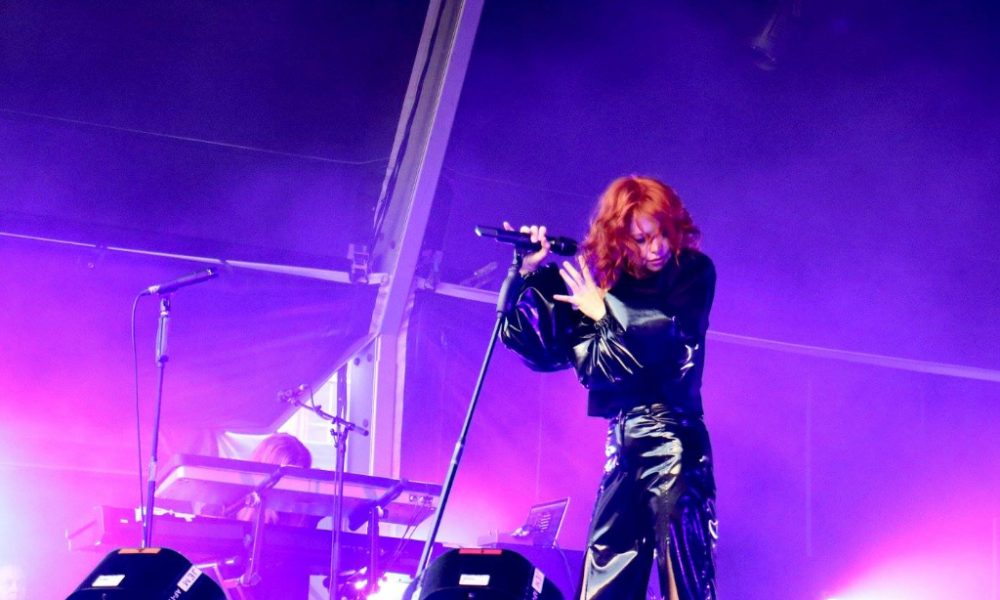 The show begins with Utopia, a calm and rhythmically slower song from Goldfrapp’s usual dance electronica music. Lovely Head, with its sweet whistles, reminds one of an American Western, but takes an interesting turn with the beguiling mixers, creating an otherworldly sound. Alison’s voice is saccharin, producing an image of 1950s ballroom dance songs. The set changes tack with new single Anymore taken from Silver Eye, their latest album. The signature style of Goldfrapp is clear, with the booming synthesisers and electronic drum beats. The stage is alight with red and orange flashing beams, synchronised with the infectious chorus. Ocean has a 80s dark goth rock quality to it, in the vein of bands such as Clan of Xymox and Sisters of Mercy. You can hear the influence of co-producer experimental industrial musician Haxan Cloak. Moon in Your Mouth is placid, a contrast to the faster paced previous tracks – the vocals buoyant on the synthesiser’s textures.

Slide In, one of the highlights of the show, has high-whooping signing, reminiscent of electro experimental pop musician Grimes. Goldfrapp incorporate visuals and sound, a pleasure to the senses, and the choreography befits the music, depicting a marionette at times, both fluid and jerky. Everything Is Never Enough, an ambient downtempo track, is one of Alison’s favourites: “I love that one. It’s very special to me.”

The set picks up once again with the dance electronic Goldfrapp are known for; Systemagic, with a strong bass line, encourages the audience to dance. Somerset House is lit with floodlight, pale and romantic in the evening. As she asks “who went to the Pride march yesterday?”, a strident cheer rises, to which Number 1 begins: the softened beat of the drums and gentle bass create a blissful ambience. Ooh La La is another hit with everyone – the melody and vocals particularly reminiscent of Donna Summer’s I Feel Love.

The encore’s Shiny and Warm is an upbeat fun track, 80s electronic beats beeping away, while Strict Machine is the show’s second highlight. Goldfrapp deliver an eclectic performance, with hits and catchy new tracks alike.