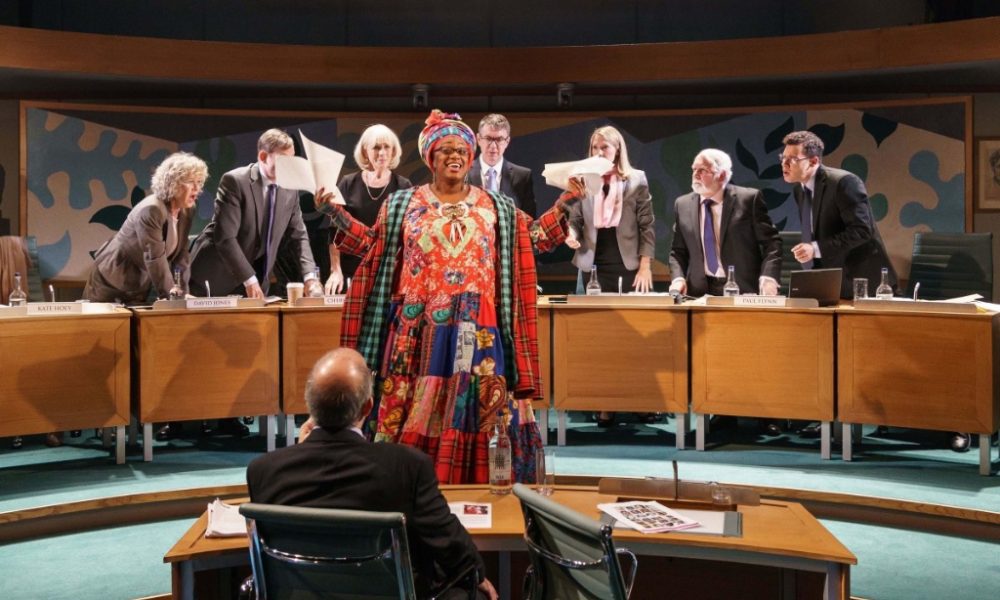 The Kids Company collapse back in 2015 provided an ugly glimpse at the intersection between government neglect and charity mismanagement. It also had something approaching a cult of personality in founder Camila Batmanghelidjh; a right-wing press bating appearance from trustee Alan Yentob; and, shoved to the peripheries of the debate, the child poverty crisis in the UK.

It’s baffling, then, that the Donmar Warehouse has managed to produce something as dramatically and intellectually insufficient as The Public Administration and Constitutional Affairs Committee Takes Oral Evidence on Whitehall’s Relationship with Kids Company. In marrying musical with verbatim theatre Josie Rourke, Hadley Fraser and Tom Deering seem satisfied with having created an innovative(ish) way to explore a difficult topic without ever questioning if they could go further, or whether the gimmicks at the centre of this piece obscure more than enlighten.

Not that it really feels like a musical. Committee is more reminiscent of the speak-sung parts that exist at the beginning and end of show tunes, only stretched to 80 minutes. When the chorus of committee members is in full voice there is admittedly some dramatic heft to the line of questioning. When sung by Omar Ebrahim’s Yentob (a Daily Mail caricature of BBC liberal elitism) and Sandra Marvin’s Batmanghelidjh (resplendent in both voice and technicolour dress) the effect is less compelling, often muddying the nuances of their answers.

It is telling that the most revealing moments come sans music, when written or oral evidence not given by Yentob or Batmanghelidjh is presented. Here committee members step forward to deliver testimonies from people like case workers and government employees, shading light on the (plentiful) areas of the situation that aren’t properly addressed by the hearing. Yet even then this barely scratches of those affected by Kids Company.

To justify its existence the production needed to look beyond the hearing, to bring in voices neglected by those in attendance. Committee gets at this by having Marvin’s Batmanghelidjh sing a similar argument at the show’s close. That Rourke, Fraser and Deering didn’t take this ending as their starting point, then, is just lazy. In a way, it’s a crime that the show is less than an hour and a half long. Not because of any great wish to sit through more of it, but because of how much is missing.

If highlighting the inadequacies of the hearing process was the aim, then bravo. Job done. But that’s a pretty shallow takeaway from a story that has so much to say about Britain’s approach to poverty, and how too often that state responsibility is taken up by well-meaning, but flawed, human beings – look at your Bonos and Bob Geldofs – instead of long-lasting structural change.

The Public Administration and Constitutional Affairs Committee Takes Oral Evidence on Whitehall’s Relationship with Kids Company is at the Donmar Warehouse from 3rd July until 12th August 2017. For further information or to book a visit here 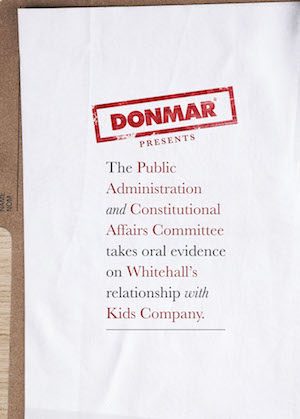