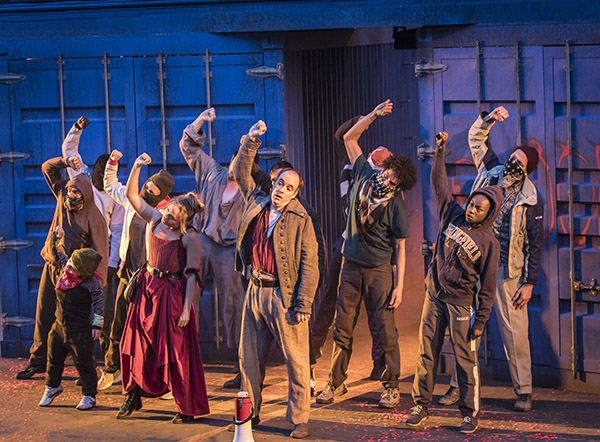 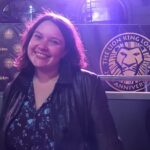 Matthew Dunster’s adaptation of Charles Dickens’s A Tale of Two Cities is an ambitious attempt to compare present-day Britain with the French Revolution whilst also exploring the role of this country as a “refuge” along with the Dickensian themes of oppression, poverty and a corrupt elite. This production is not suitable for small children, but considering the subject matter this shouldn’t come as a surprise. Stories about guillotines, murder and tragedy are not fun for all the family, and a few “F” words and sexual references shouldn’t be your main concern.

When the play opens the cast is dressed in modern clothes and appear to be arriving in Calais as modern-day refugees. It is not until one of the characters mentions that the date is 1775 that the time frame becomes obvious. These costume choices are meant to push the “conversation between two centuries”, but the piece seems to forget this theme as it goes on, until almost at the end all of the cast have joined the 18th century. One also had to suspend disbelief during this performance because the whole idea that Carton and Darnay could swap identities is much less convincing when the two actors look nothing alike.

Dunster is trying to compare the 18th century with the 21st, but whilst the message of the UK as a refuge for all and the images of a family being broken up at British borders are certainly relevant, the rest of the comparison doesn’t really work simply because the similarities are not strong enough and the attempts to push them are in danger of coming across as crass, overly intellectual and even insensitive given our own recent tragedies. The early scenes with the Marquis are some of the best of the production because they raise the energy, show off some great costumes and inject some much-needed comic relief.

The music, lighting and sound effects (including the guillotine) are very impressive and aptly timed. The stage features three blue industrial-style units, used to represent rooms, carriages and prisons, which are utilised very effectively. Two screens on either side of the stage show various film montages including the footage of a modern London skyline, Tony Blair, RuPaul and rioting. These screens seem bent on bringing comparisons between the two time periods, but whilst the riot images and the travelling sequences are relevant, some of the other videos seem quite random and out of place.

A Tale Of Two Cities is a classic tale of history, tragedy and the horrors of revenge, but it is also full of loops, revelations and subplots that start to drag in the three-hour running time. The play ends on a strong note and its final message is both thought-provoking and heartbreaking, but by this point the audience just wants to go home.

A Tale of Two Cities is at Regent’s Park Open Air Theatre from 7th July until 5th August 2017. Book your tickets here.

A Tale of Two Cities