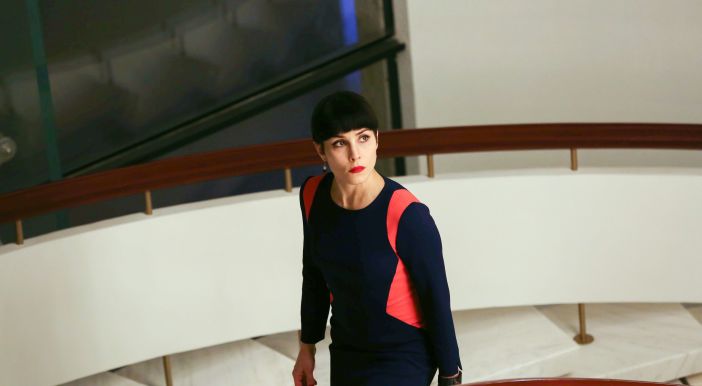 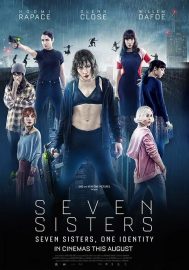 If you spend the first 15 minutes of a screening in a fit of delirious hysterics there’s certainly something afoot. Within this time Tommy Wirkola’s car-crash dystopia What Happened to Monday? has done several things. Willem Dafoe’s sage says to his identical septuplet granddaughters, “You must take on a singular identity”; Glenn Close’s unhinged-woman-at-the-fruit-market imitation of Margaret Thatcher declares “The Child Allocation Act” from a polystyrene pulpit; and seven Noomi Rapaces in a variety of wigs discuss the injustices of a totalitarian government’s one-child policy. This reviewer must confess, dear reader, to laughing at all of this.

The plot is a plot that’s frightened of its own existence, a single quivering atom of an idea, stretched, bullied and contorted into a two-hour science fiction thriller. Nicolette Cayman (Close), a despotic leader not seen in contemporary politics until recently, has ordered the removal of all siblings to a pristine detention centre only found in apocalyptic fables. These siblings are cryogenically frozen, which unfortunately translates into a ghastly evisceration of blue fire. Flashbacks show Terrence Settman (Dafoe) impractically concocting a ruse wherein each of his endangered grandchildren undertakes the same moniker, Karen Settman (Rapace), for each day of the week to avoid capture. There are seven of them, there are seven days in a week, and so their names therefore correspond to… In short, this fragile arrangement won’t last long in a myopic and intolerant moral climate. The set design looks like a pick-and-mix from every grim, skyscraper-filled dystopia of yore. There’s the inevitable depiction of an underclass that live in tents under the subway; there are also homeless people who throw bottles. This is end-of-the-world politics for Banksy fans. All the while – and after that rocky start – a slightly enjoyable, sweary, bloody action film emerges. (The swearing feels particularly perfunctory given the movie has less thematic development than a YA novel.)

But any final judgement rests almost entirely on the feature’s sense of its own importance. At times it seems in on the joke: some comical asides, some amusingly gruesome violence, some flickers – maybe, was it? – of self-awareness. This generous interpretation, which factors in the pure entertainment of the admirably crafted fight sequences, suffers gravely in the closing moments. The story obviously wants to side with anti-establishment sentiment against the restrictions on basic freedom, but the writers can’t help but sympathise with the quasi-Malthusian teenager nihilism that decries overpopulation. If, as purported, it is based on the pseudoscience of works like 10 Billion, the book and film can share the same terse review: both are unscientific and misanthropic. At least heads explode in this, even under the guise of utmost gravity.

What Happened to Monday? (Seven Sisters) premiers on Netflix on 18th August 2017.

Watch the trailer for What Happened to Monday? (Seven Sisters) here: